John Oliver on paid time off for mothers: Thanks for having us, mom — now ‘get the f*ck back to work’ 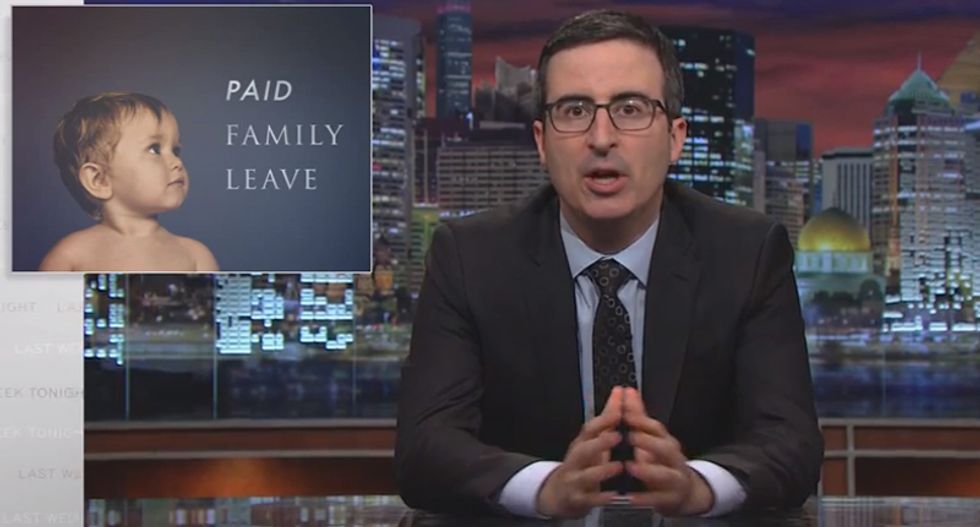 On HBO's Last Week Tonight, host John Oliver used Mother's Day to draw attention to the fact that -- as much as we profess to love mothers and motherhood -- the U.S. is one of only two countries that do not offer paid time off to new mothers who work.

With retailers vying with florists for Mother's Day dollars -- even beer-and-wings joint Hooters pitches themselves as a place to take mom for Mother's day -- Oliver said, "There is nothing that we wouldn't do for moms."

Pointing out that the United States and Papua New Guinea are the only two countries that do not offer paid time off, Oliver said, "Here in the U.S. federal law grants workers just twelve weeks on unpaid leave," before pointing out conditions that keep 40 percent of workers from being able to take that time off.

"So if a worker with no paid leave goes into labor at work, she better hope it's on her lunch hour and her co-workers don't mind if the break room gets a bit messy," Oliver explained.

Sharing a collection of stories demonstrating how women are forced back to work well before they should be leaving their newborns -- with one women having to return, leaving her prematurely born baby in the hospital -- Oliver pointed out lawmakers' resistance to providing mandates that support mothers and newborns, claiming it hurts businesses.

Oliver provided a clip of multiple lawmakers from Minnesota, who voted down a paid family leave bill, professing their deep and undying love for their mothers.

"Okay. Just pump the brakes just a bit," Oliver said. "Because moms are like feet. The more you talk about them in public, the more everyone assumes you want to have sex with them. So... just don't."

Oliver wrapped up with a video honoring America's mothers for their sacrifices; giving birth to us, raising and nurturing us, before saying: "Now get the f*ck back to work."

Watch the video below uploaded to YouTube by Last Week Tonight:

Months after Oscar-nominated filmmaker Lucy Walker began making a documentary about the largest-ever wildfire in California, the blaze lost its crown to an even bigger inferno.

The 2017 Thomas Fire is now only the seventh worst by area destroyed -- and is likely to be overtaken soon by the Dixie Fire raging through the state's northern forests, as climate change makes wildfire season longer, hotter and more devastating.

Boeing will be aiming to get its spaceflight program back on track Tuesday with an uncrewed flight of its Starliner capsule to the International Space Station (ISS), after its last such test in 2019 ended in failure.

The spaceship is due to launch on an Atlas V rocket built by the United Launch Alliance from Cape Canaveral Space Force Station in Florida at 1:20 pm Eastern time (1720 GMT).