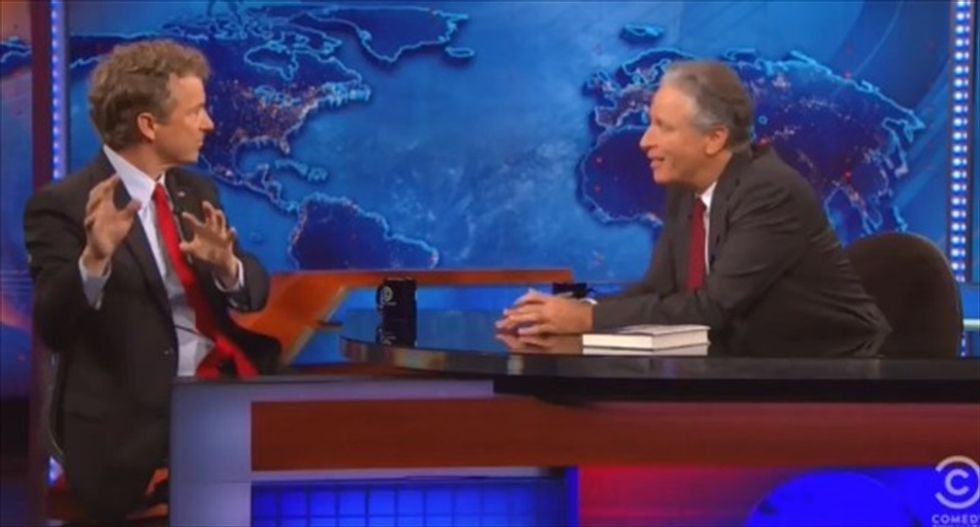 Daily Show host Jon Stewart pushed back against Kentucky Sen. Rand Paul on Tuesday for trying to frame opposition to same-sex marriages -- and their wedding cakes -- as a "religious freedom" issue.

"It seems like gay marriage looms a lot larger in the minds of certain conservatives than it does in the Bible," Stewart told the GOP presidential candidate. "And the only thing I would say is, don't they sell cakes to sinners all the time, adulterers?"

Stewart pointed out that if Paul were to enter a bakery looking for a wedding cake, the staff was not likely to ask him if he broke any commandments.

"It feels disingenuous," he told the senator.

Instead of responding directly to Stewart's point, however, Paul steered the discussion toward the Patriot Act.

"What I've been filibustering against is whether or not a warrant that has a corporation's name on it [like] Verizon can collect all the records of all the people if corporations are people," he said. "So we're right back to the Patriot Act and I think we agree now."

Earlier, the Tea Party senator had argued that the First Amendment granted people "the right to be despicable," saying that, while he did not agree with the "Ground Zero mosque" that was proposed for construction in New York City shortly after the 9/11 attacks, he would not oppose that or a Ku Klux Klan march.

"What I'm saying is, I think you can personally object to things that the law will allow, and it doesn't mean that we all have to say that we all will accept everyone else's beliefs on everything else," Paul insisted.

The senator did not mention that he attributed same-sex marriages to a "moral crisis" in the US earlier this year, instead saying that religious conservatives were afraid that their opinions would no longer be allowed, even in their own churches.

"You portray it as, 'We don't want to force people to have to agree with your beliefs,'" Stewart told him. "But we're not. We're asking them to do the thing that they do for their business."