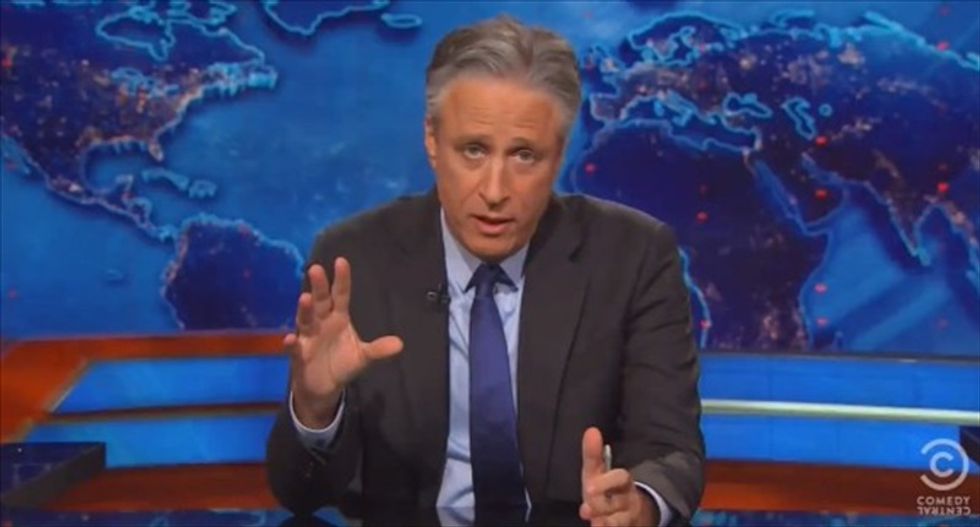 Daily Show host Jon Stewart ripped the wave of conspiracy theories surrounding the Jade Helm 15 training exercises, which have some people concerned over a "Texas takeover" by the federal government.

"You know who's calling it a 'Texas takeover'? Lone star lunatics. Dallas d*cks, Houston a*sholes," Stewart said. "There's no Texas takeover. The United States government already controls Texas. Just borrow a textbook from a neighboring state -- it's all in there."

While it was "adorable" for Gov. Greg Abbott (R) to think that the state guard could pick a fight with the military and win, Stewart said, the exercises date back to at least 2001, when another Republican, George W. Bush, was president and Rick Perry let the operations continue without incident.

"It appears you are on the verge of being taken over by ISIS or the United States of America," Stewart said. "So you have a choice to make. And when you make it, just remember -- and I never thought I'd be saying this -- what would Rick Perry do?"

"AFDI is a First Amendment group the same way people from Philly are sports fans," he said. "Ostensibly, they like sports, but really they're looking for an excuse to punch a stranger and pour beer on someone's baby."

Nevertheless, he argued, "It is not okay to shoot other people because you are offended by what they draw. Even if they drew it to offend you, no shooting of them. Never okay."

That statement led to an impromptu meeting with his correspondents, who popped out from under his desk looking for loopholes.

"What if someone is creating a climate of hate and intolerance by appealing to peoples' basest fears?" Hasan Minhaj asked.

"No. The violence just perpetuates the fear," Stewart replied. "You can't. Thank you."

Stewart found himself fending off questions from not only Minhaj, but Jessica Williams, Jordan Klepper, and a returning Al Madrigal, who took the host by surprise.

"I haven't seen you in like six months," Stewart said, before asking, "When did you get here?"

"I've been down here the whole time," Madrigal replied.

Prosecutors in Manhattan are threatening to file new charges against jailed Trump Organization CFO Allen Weisselberg as part of a ploy to get him to hand over even more information, reported The New York Times on Thursday.

"Mr. Weisselberg, the Trump Organization’s former chief financial officer, is already serving a five-month sentence in the Rikers Island jail complex after pleading guilty to unrelated tax fraud charges. While he testified against the company at its trial on the same charges last year, he has for years refused to turn on Mr. Trump directly," reported Ben Protess, William K. Rashbaum, and Jonah E. Bromwich. "But as the Manhattan district attorney, Alvin L. Bragg, jump-starts his office’s effort to indict Mr. Trump, his prosecutors are using the prospect of additional charges to exert leverage over Mr. Weisselberg, the people with knowledge of the matter said. The potential charges, which prosecutors conveyed to the former executive’s legal team this week, center on insurance fraud and could lead to a significant prison sentence for Mr. Weisselberg, who is 75."

New York Times reporter Charlie Savage was on the team of reporters that broke the recent report that special counsel John Durham and Attorney General Bill Barr were corruptly using the Justice Department in an attempt to discredit Robert Mueller's investigation. The effort failed, but only after nearly four years and $6.5 million in taxpayer dollars.

Two former prosecutors, now serving in Congress, have asked the inspector general at the DOJ to begin a probe into the conspiracy, but there's another entity under the department that could also be jockeying for the investigation: OPR - the Office of Professional Responsibility. OPR was started after Watergate in an effort to ensure the ethical standards of lawyers working under the DOJ.