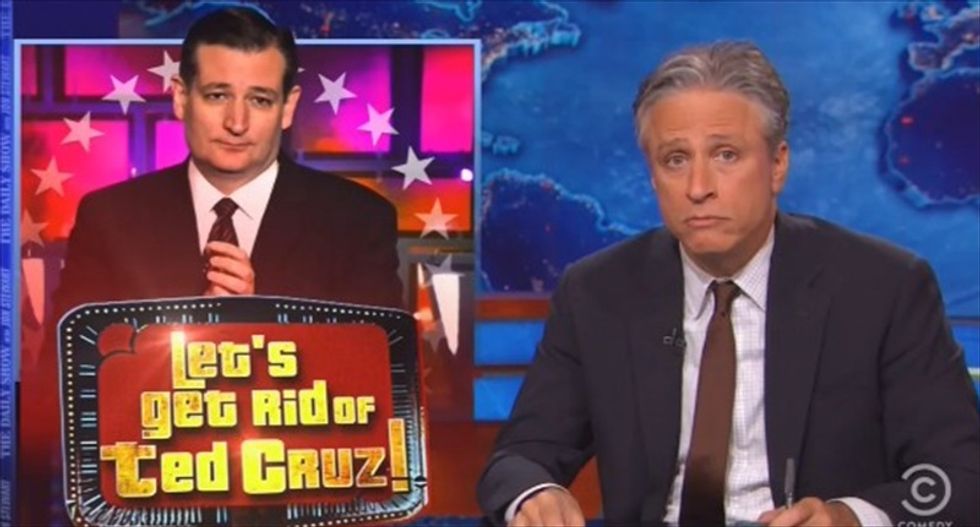 Daily Show host Jon Stewart made the case on Tuesday that Tea Party Sen. Ted Cruz can be eliminated from the Republican primary field because he can't live up to the "extremely high standards" he claims to have for President Barack Obama and Democrats.

Stewart chided the Texas Republican for, among other things, mocking Obama for acting as "fundraiser-in-chief" and vowing to vote against Loretta Lynch's nomination for Attorney General, only to actually miss Lynch's confirmation vote because he was attending a fundraiser.

As the audience booed, Stewart turned toward a picture of Cruz and said, "I think they see how disappointed Ted Cruz will be in you, you."

Cruz also fell short, Stewart argued, when he accused Obama of exacerbating racial tensions during his presidency, only to fumble and "take like a minute" to rephrase his statement when CNN asked him to provide specific examples.

And while Cruz accuses Democrats of relying on strawmen arguments, Stewart said, he has no problem complaining about "liberal fascism" or a "jihad" being waged against anti-LGBT laws in Arkansas and Indiana.

"So you want a president who can bring people together," Stewart said sarcastically. "Who understands that, if you're pro-marriage equality, you are the same as ISIS. Got it."