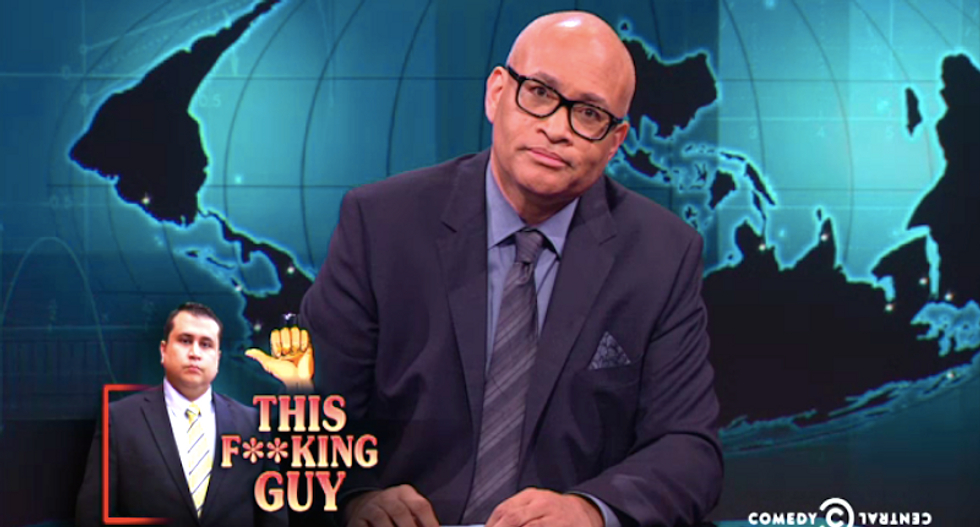 Larry Wilmore’s audience could not stop cheering at the news that George Zimmerman had been shot in the face – no matter how many times the host corrected them.

“There is big new in the world of wrongfully acquitted unhinged menaces,” Wilmore said.

Initial reports indicated Zimmerman had been shot in the face, but police later said he had been injured by broken glass when another man fired at his pickup in self-defense after the notorious former neighborhood watchman waved a gun at him.

“OK, so he was waving a gun in traffic -- or, as George Zimmerman likes to call it – Mondays,” Wilmore said.

Zimmerman was acquitted in the 2012 fatal shooting of Trayvon Martin, an unarmed black teenager, after he claimed the 17-year-old attacked him.

He has since been accused three times of domestic abuse, but the accusers have recanted in each case and Zimmerman was never prosecuted.

Whenever Wilmore mentioned Zimmerman’s injuries or played a video clip that indicated he had been wounded, the crowd erupted in cheers.

The Nightly Show’s director fired a confetti cannon and dropped balloons at the news, and a marching band entered the set to a John Philip Sousa tune.

“He didn’t get shot in the face -- and even if he did, it would be wrong to celebrate someone getting shot,” Wilmore said, but the lead marcher argued that it was George Zimmerman.

“You make a good point, but anyway – he didn’t get shot in the face,” Wilmore said. “So shoo, bloodthirsty marching band.”

Wilmore played a clip of a news anchor describing the incident as the “antics of Florida’s bad boy George Zimmerman.”

“The antics? Of Florida’s bad boy?” Wilmore said. “The guy murdered an unarmed child – he’s not the Fonz.”