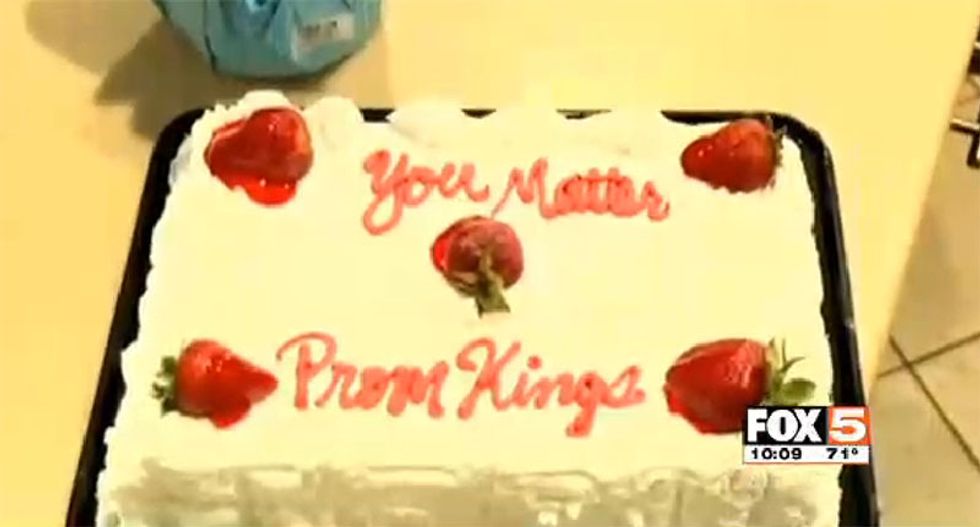 The cake Jennifer Sandoval got for her nephew, which reads "You matter, prom kings." (Screen capture)

Two Las Vegas teens received much love and support last week after their "promposal" video went viral. When a family member of one of them went to get a cake for him at a Walmart store before the dance, however, she was told that she couldn't write the word "gay" on the cake, reports KVVU-TV.

Last week, teen Anthony Martinez's straight best friend Jacob Lescenski asked him to prom because Anthony, being gay, had never gone to a prom with a date. Overjoyed by the flood of positive responses the teens received, Anthony's aunt Jennifer Sandoval went to her local Walmart store in Las Vegas on Saturday to get her nephew a surprise cake to celebrate before the dance.

At the store, she was told that she couldn't get the cake she wanted which read, "You're gay, he's straight, you're going to prom, you couldn't have had a better date."

The initial employee told Sandoval that she couldn't write that on the cake because it included the word "gay," which was against store policy. She then asked to speak with a supervisor.

"Supervisor takes my phone, looks at it, and was like stuck for a minute, and she was like, 'OK, I'm sorry, we can't use this'. And then I said, 'I'm going to ask you what I asked her because you're the supervisor. Why can't I use this? I don't understand. It's one word. It's gay,'" Sandoval recalled.

"One word 'gay,' which is the meaning of happy, isn't going to harm putting that on a cake," said Sandoval.

In the end, she had to settle with a cake that read, "You matter, prom kings."

"Even though he liked what was on there already, I just wanted what I originally wanted," said Sandoval.

When reached out by KVVU, a spokesperson of Walmart said that the store investigated into the incident and found that the initial employee didn't contact proper management. They said that their store's policy does not say that the word "gay" can't be written on a cake.

A store manager also tried to contact Sandoval to make this wrong right, according to KVVU, but Sandoval said that this gesture came a little too late.

"It wasn't hurtful," said Sandoval. "It was to make my nephew happy, to see a smile on his face. I love that smile, to see that smile, that's all I wanted, and I'm disappointed. I really am."

Watch video below, courtesy of KVVU-TV.