Lindsey Graham: Hillary Clinton is beatable, but GOP is getting 'creamed' at the polls by non-white voters 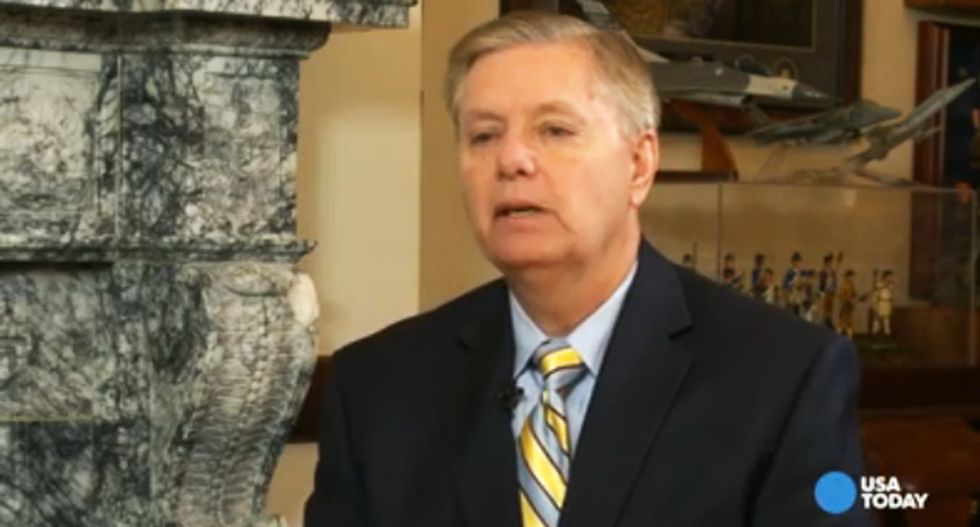 In an interview on USA Today's "Capital Download," South Carolina Sen. Lindsey Graham (R) said he was "98.6 percent sure" he'll run for the Republican presidential nomination, but admitted that the GOP has a problem with non-white voters where his party is getting "creamed."

Graham said that he will announce his candidacy soon, joining an already crowded field of candidates, all of whom believe they can beat presumptive Democratic nominee Hillary Clinton.

"There's a reason there's a lot of people running on our side," Graham explained. "We all think we can beat Hillary. The world is falling apart. I think I have a good background. Experience and judgement to re-set what I think is radical Islam running wild. We're gonna get hit hard if something doesn't change."

While Graham believes that Clinton is beatable, he doesn't believe that it will be easy.

"I think she's going to be a tough candidate, but I think she represents the third term of a failed presidency," Graham said. "The only way we’d lose this election is if we beat ourselves, and that’s very possible. But we’re getting creamed with non-white voters.”

Talk then turned to the contentious immigration debate within the Republican Party, with Graham taking a softer and more conciliatory approach to undocumented immigrants.

"If I were president of the United States, I would veto any bill that did not have a pathway to citizenship," Graham explained. "You would have a long, hard path to citizenship ... but I want to create that path because I don't like the idea of millions of people living in America for the rest of their lives being the hired help. That's not who we are."

No interview with Graham would be complete without him taking a shot at rival Sen. Rand Paul of Kentucky, with Graham questioning Paul's foreign policy positions, saying he "is leading from behind."

"At the end of the day, his world view has not stood the test of time and I think he'd be the worst possible person to send into the ring when it came to foreign policy," Graham said, adding that Clinton "could get to his right very easily."

Watch the video below from USA Today: