May Day rallies in Asia as South Koreans clash with police 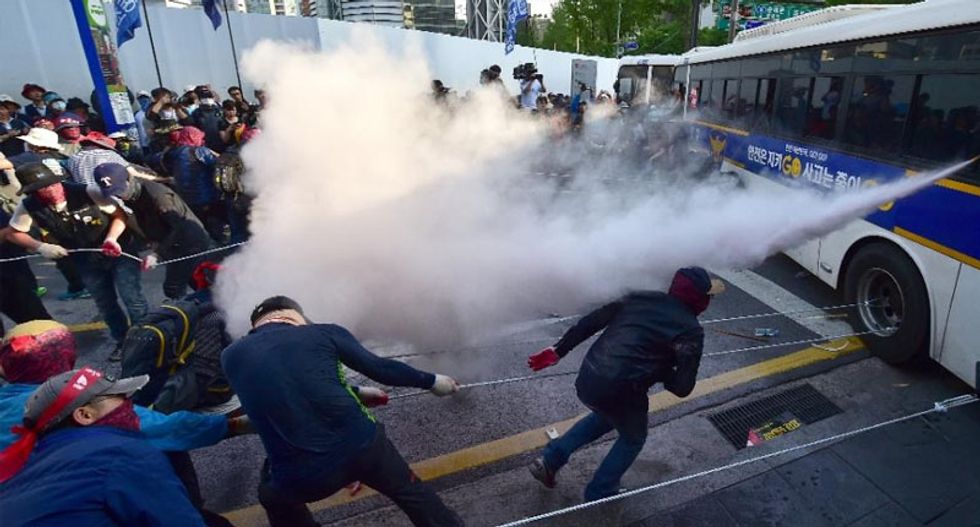 South Korean riot police use fire extinguishers from their bus to stop protestors who tried to force their way through barricades during a May Day march toward the presidential house in Seoul on May 1, 2015 (AFP Photo/Jung Yeon-Je)

South Korean workers clashed with riot police at a May Day rally in Seoul on Friday, vowing to wage an "all-out general strike" if the government pushes through with planned labour reforms.

Thousands of riot police erected barricades to block about 10,000 workers from marching toward the office of President Park Geun-Hye.

The police fired water cannons laced with a chemical irritant in scattered clashes with some marchers who tried to force their way through barricades in a tense three-hour standoff on the roads leading to Park's office.

Park's conservative administration is seeking to push through a reform plan that it argues would introduce flexibility to a rigid labour market, by making it easier to hire and fire.

"We will crush any government attempts to suppress labour rights with an all-out general strike," Federation of Korean Trade Unions head Kim Dong-Man told the crowd at a rally near parliament.

Elsewhere in Asia, dozens of protesters in Taiwan threw smoke bombs near the presidential office during a workers' rally, while in Hong Kong domestic helpers were out in force to seek greater rights.

Hundreds also gathered in downtown Manila to press for higher wages and more job opportunities at home, to prevent so many Filipinos heading overseas, often into vulnerable situations or outright danger.

Activist Renato Reyes said the case of Mary Jane Veloso, a maid who narrowly escaped execution in Indonesia this week for drug crimes, highlighted a "very severe jobs crisis" that forces the poor to go abroad.

Similar themes played out at a protest in Taipei attended by several thousand people who demanded that Taiwan's government enact higher pay, shorter working hours and a ban on temporary hiring.

"We threw the smoke bombs to protest and ridicule the government's chaotic policies and its inability to resolve issues such as unemployment and low pay, especially among young people," said Han Shih-hsien, an organiser of the protest.

In Hong Kong, hundreds gathered to sing songs and dance in calling for better working conditions for both local and migrant workers.

The plight of maids in Hong Kong was highlighted by the case of Indonesian helper Erwiana Sulistyaningsih, who was beaten and starved by her employer Law Wan-tung in a case that made world headlines.

"The Hong Kong government can certainly do a lot to bring down that archaic, traditional and feudal attitude towards domestic workers," he said.