Megachurch pastor rejects his father's bigotry: Jesus would want you to bake a gay wedding cake 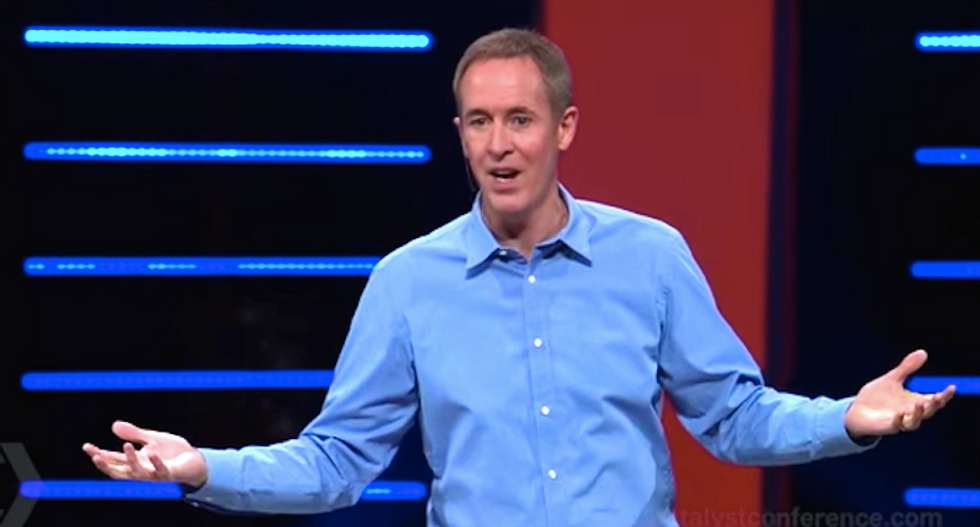 The head of an Atlanta megachurch has rejected his pastor father’s hateful views on homosexuality and says the church should be the “safest place on the planet” for gay young people.

Andy Stanley, who has turned North Point Ministries into one the nation’s largest churches, said Christians must stop driving gay teens away from the church – saying that politics should not overrule biblical teachings, reported Project Q.

His views stand in stark contrast to his father – who once hired armed security guards on horseback to protect his church from Atlanta gay pride marchers.

Charles Stanley, pastor of the First Baptist Church Atlanta, has said AIDS is God’s punishment for America’s acceptance of homosexuality – which he describes as “destructive behavior.”

The anti-LGBT pastor teaches that being gay is a choice that can be overcome, and he said accepting gay people is “disobedience to God.”

His son, however, urged Christians to “take a break” from the culture wars for a year and lead by example.

"There are so many Christians, so basically -- if we would just be better Christians, everything we would like to see changed for the most part would change,” he added.

"Serving people we don't see eye to eye with is the essence of Christianity,” he said. “Jesus died for a world with which he didn't see eye to eye. If a bakery doesn't want to sell its products to a gay couple, it's their business -- literally. But leave Jesus out of it."

The younger Stanley’s church has gained a reputation for being “gay-friendly,” and he explained that he treats LGBT congregants the same as anyone else.

That’s reflected in his recent book, "The New Rules for Love, Sex and Dating," which does not directly address LGBT issues – which he said was by design after meeting with gay members of his church.

“I asked them if they wished I would have addressed them specifically, since all of my illustrations and teaching assumed heterosexual relationships,” Stanley said. “These men and women unanimously said no. They said that in the LGBT community, when they attend church, they are accustomed to contextualizing all the relationship teaching anyway.”