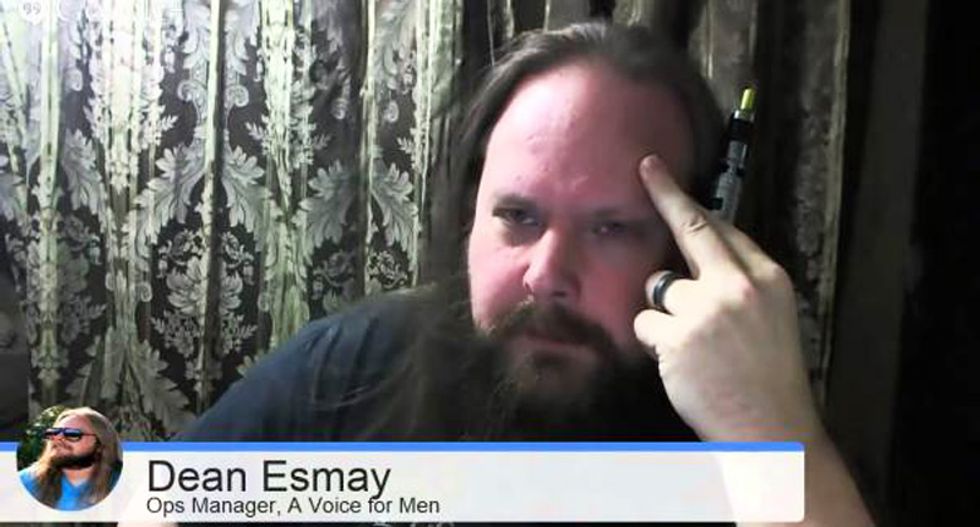 You may recall last week when certain members of the masculinist Viagra-American men's movement got all enturbulated (fancy Scientology word for "panties in a bunch") upon discovering that Mad Max: Fury Road was bound to be a feminist classic .

Writing at the aggressively butched-up Return of Kings, Aaron Clarey expressed dismay after learning Max director George Miller had betrayed men when he invited Vagina Monologues writer Eve Ensler to get her lady cooties all over the script.  Clarey wrote that Hollywood had the gall to remove "the name sake of a movie franchise called MAD FREAKING MAX, and replace it with an impossible female character in an effort to kowtow to feminism."

On this point, Clarey is correct. Having seen the film, the women do indeed rock out without the need for men's cocks out. It's like a remake of Steel Magnolias -- but with actual steel this time, a few more explosions, and a couple more violent deaths by chainsaw.

To everyone who wasted time reading Clarey, it appeared that he was calling for a boycott of the film when he wrote:

So do yourself and all men across the world a favor. Not only REFUSE to see the movie, but spread the word to as many men as possible.

Because if they sheepishly attend and Fury Road is a blockbuster, then you, me, and all the other men (and real women) in the world will never be able to see a real action movie ever again that doesn’t contain some damn political lecture or moray about feminism, SJW-ing, and socialism.

And lo, the world did scoff and laugh and chortle at the men's rights movement. Again.

But wait. In a podcast -- which can most accurately be described as "the sound of one hand fapping"-- Clarey makes it clear that he is not an MRA; he just hates feminists with their incessant whining about rape, pay inequality, and their constant "shoving of the feminism down America's throat." Always these guys, with the "throat" and the "shoving."

But Clarey says he's not an MRA.

I'm sure you can see the difference. Try squinting real hard.

Dean Esmay at A Voice for Men spent the weekend Twitter twatting at the mainstream media for pushing the blood libel that MRAs were boycotting the film. He also burned the midnight oil, furiously writing multiple posts calling reporters big poopy-headed liars and demanding they make retractions, apologize, and then shut their filthy whore mouths.

According to Dean, AVFM is The Official Voice™ of MRA's and if they -- or his own bad self -- didn't officially call for a boycott, well it didn't happen and it's bogus. More importantly:  anyone else who calls for a boycott is no true MRA.

Let us be clear: any claim that Men’s Rights Activists are in any way boycotting Mad Max: Fury Road is misreported at best. If any person in the media tells you of this purported boycott, you need to correct them, and if they refuse to acknowledge the correction, you need to complain to their editors. If they continue to repeat the lie, they are smearing and slandering innocent human rights activists. This is an abuse of power.

This is serious. The early creators of this bogus, debunked story are all running from the story and hiding from comment. Those of you who are in the press who were duped by your fellow journalists owe it to your readers, and your respective publications, to call these other reporters to task for misinforming the public. The mainstream media’s reputation is the lowest it has ever been. Is it time, perhaps, for some of you to dig in and recommit to telling the full story to your readers, regardless of who is made unhappy?

Like it's twin brother, the gamergaters, there really is no formal membership in the MRA movement.  As long as you hate women and all they stand for you're part of the gang. You can walk like an MRA, talk like an MRA, and even grow a neckbeard like them and it's all, "Hail fellow, well, met. Bitches, waddya gonna do, amirite?" There is probably an elaborate and awkward handshake too.

However, if you go rogue and do something that can be bring disrepute to the movement, well that is where they take their cue from Mission Impossible: "As always, should you or any of your MRA Force be caught being rapey or violent, we totally don't even know you, dude."

It's a great way to duck responsibility for anything and everything. Almost like they're going through their divorce. Again.

Of greater importance to Esmay is where so many writers who read the anti-feminist guy calling for a boycott of Fury Road got the wacky notion that guys who hate feminists were talking about boycotting the film. Weird, right?

There is, of course, a simple explanation.

Take it away, Dean:

And by the way, we are really serious with this question: was anyone paid to put this fake story in the press? If so, who was paid and who did the paying?

It's all a part of the Vast Feminist Conspiracy.

4. Take their homes, children, and money.

5. Use some of that money to pay journalists to mock them as part of an ad campaign for a newly released movie.

You got us, Dean. We're only surprised you didn't see this coming...