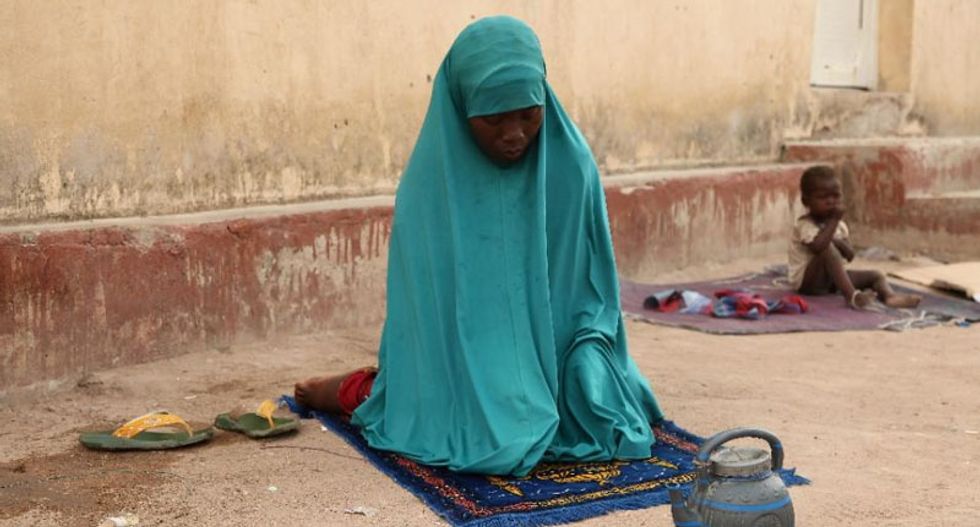 A woman rescued by Nigerian soldiers from Islamist militants Boko Haram at Sambisa Forest prays at the Malkohi refugee camp in Yola, Nigeria, on May 5, 2015 (AFP Photo/Emmanuel Arewa)

Fleeing Boko Haram fighters left the hundreds of women and children they captured to their fate in the bush as Nigerian soldiers closed in last week. Many survived but others weren't so lucky.

Aid worker Mohammed Bello spent Wednesday morning at the Malkohi internally displaced people camp outside the northeastern city of Yola, listening to the stories of some of the women rescued by the army.

One described to him how her two young children died of hunger and thirst in the militants' Sambisa Forest stronghold in neighbouring Borno state when their rebel captors deserted them.

"The bigger one was crying for food and water. The younger one was just too small. She took her shirt off and covered the bodies of her children," he told AFP after one closed-door session.

"It was only when the army came to rescue them that they gave her something to wear."

One woman told how her sister gave birth in the bush. Both she and her newborn baby died. Another described finding a baby crying in an abandoned pick-up truck, its parents nowhere to be found.

She had to leave the child where it was, Bello said.

"The stories will break your heart," he added. "When they heard the army was coming they (the women and children) started to run with Boko Haram. But the rebels left them in the Sambisa Forest...

"Luckily they escaped but the trauma is still there."

The Malkohi camp is now home to 275 women and children, brought in last weekend to recover from their ordeal and prepare them for a return to their home towns and villages.

How long that will be is anyone's guess, despite the Nigerian Army's recent claimed successes in driving out the insurgents from captured territory in three northeastern states.

But while physical wounds and illnesses can be treated quickly, the women and children's psychological state will likely take longer to address.

According to Amnesty International, more than 2,000 women and girls have been kidnapped since the start of last year.

Some 700 have been freed in recent weeks, including 25 more on Tuesday. The numbers give an idea of the scale of the rehabilitation required.

Wednesday saw the first sessions with some 30 trained counsellors, encouraging the women to talk about their experiences to help them come to terms with what happened.

Not only have they endured being uprooted from their homes at the point of a gun but they have lost husbands, children and other family members, sometimes killed in front of them.

"Most of them have gone through several different forms of gender-based violence, not once but several times that must have affected them not only physically but mentally," said psychologist Christian Macaulay Sabum.

A psychologist has also been summoned from Maiduguri, 405 kilometres (250 miles) by road to the north, added Sabum, from the UN Population Fund (UNFPA).

International non-governmental agencies are on hand to work with the children, he said.

Regina Mousa knows some of what the women have gone through. Her daughter, Nancy, then aged 12, went missing for three years when civil war erupted in her native Sierra Leone in the 1990s.

"Somehow I was being prepared for this," said Mousa, a psychologist at the American University of Nigeria in Yola, which is heavily involved in helping those displaced by Boko Haram violence.

"How I survived I don't know. We managed to find her. As far as the trauma is concerned, I've gone through it myself personally and with my family," she said.

"We all know the trauma they have gone through. It's going to take some time. It's not going to happen overnight."

"It's going to take six months, maybe a year depending on the level of trauma they have experienced, especially with the children."

The "psycho-social" groups -- some of them held under trees in the compound, others behind closed doors -- are designed to identify their needs.

Some have already been pinpointed for a course of anti-depressants or treatment for anxiety.

"One woman jumps at the mention of Boko Haram," said Bello.

Others may seem to be coping, happy to be finally free, but delayed reactions need to be watched, such as the vivid flashbacks and bad dreams that come with post-traumatic stress disorder, said Mousa.

"Some have not come out of their rooms yet. They come when they're asked. They're the ones I'm looking out for. The silent ones are the really dangerous ones. These need to be on medication."