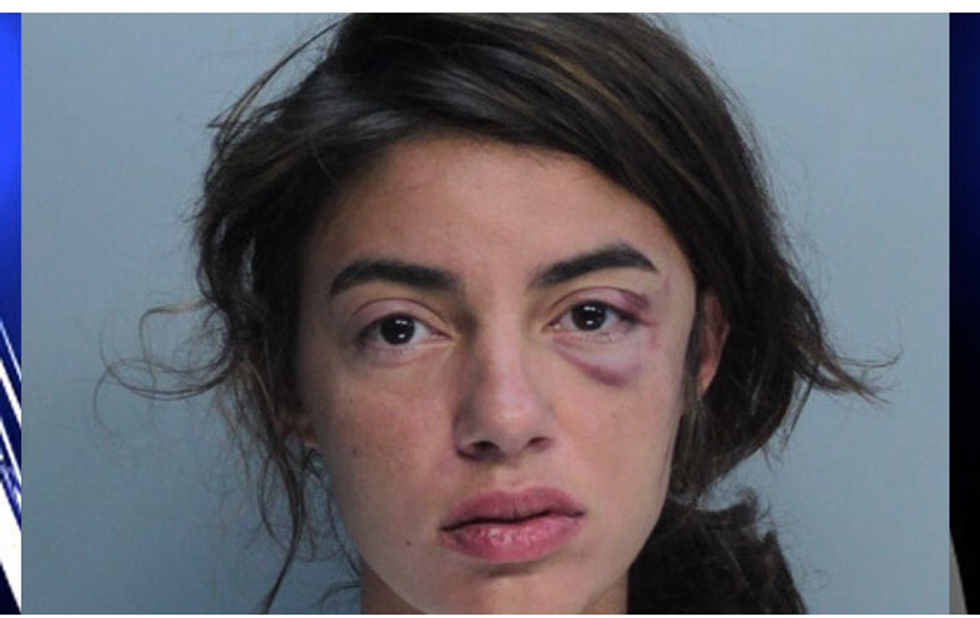 A Miami Beach police officer who kicked and punched a model whose hands were cuffed behind her back has received a month's unpaid suspension nearly two years after the melee took place. Why did it take so long to reprimand the cop? Because officers never reported the use of force. But an internal investigation uncovered video footage of the assault, the Miami Herald reports.

On June 26, 2013, Miami police responded to a disturbance call about a drunk woman -- Megan Adamescu-- in the South Bay Club lobby. Finding the suspect, who happened to be a model, sufficiently unruly to put under arrest, officers handcuffed Adamescu's hands behind her back.

Surveillance footage released by the Miami Herald shows a visibly angry and handcuffed Adamescu kicking a police officer in the lower leg in the parking garage behind Beach police headquarters. The plain clothes police officer, Phillippe Archer, was black. Adamescu, who is white, reportedly directed a racial slur at Archer, prompting the cop to punch her in the face and launch a kick toward her head. A fellow officer (also in plain clothes) pulled Adamescu away.

While Archer was attacking Adamescu, a passerby named Andrew Mossberg stopped to intervene in what he believed to be a mugging. "Mossberg called the police and stepped in even after Archer identified himself," the Miami Herald reports. "Adamescu then hit a distracted Archer, who struck her and Mossberg in the ensuing struggle."

Mossberg's head wounds were bad enough to warrant some intense head bandaging, pictures of which were circulated in the media. "But Archer’s suspension is not connected to the altercation with Mossberg," according to the Miami Herald.

Archer's current punishment, rather, is only related to "the blow to Adamescu’s head." Archer had evidently never previously reported this use of force against the model, though he did pose and smile in a photo with a bandaged Mossberg.

Though they received complaints about Archer's behavior, the state's attorney's office chose not to prosecute, as did the FBI.

“We received a complaint that Philippe Archer of your agency may have been involved in violating the civil rights of Andrew Mossberg and Megan Adamescu,” wrote Robert J. Moossy, Jr., criminal section chief of the civil rights division of the DOJ. “We recently completed our review of the results of the investigation of that complaint to determine whether a federal criminal prosecution was warranted. After careful consideration, we concluded that the evidence does not establish a prosecutable violation of the federal criminal civil rights statutes.”

Ed Griffith, spokesperson for the state attorney, tells the Miami Herald that "battery could not be proven" from the video showing footage of Archer attacking a detained woman in handcuffs.

“The battery that was the focal point of the possible criminal charge could not be proven beyond a reasonable doubt given that the victim initiated it,” Griffith says.

“My disciplinary action speaks for itself,” Police Chief Dan Oates said in a statement on Monday. “This event occurred nearly two years ago, before much of the current city and Police Department leadership was in place. Everyone, including the officer involved, has learned from this event. We are moving forward.”

Internal investigators had harsher words for Archer in their summary report.

Characterizing Archer's attack on  Adamescu as meeting a "slight woman’s meager schoolyard kick with excessive, unnecessary, and unwarranted use of force,” the report laid into Archer pretty directly:

“Your experience, knowledge of rules, policies and proper practice dictates that you knew you should have reported and documented the events at the police station, you knew that taking a photo with a prisoner was inappropriate, you knew you should have properly secured the prisoners, and you knew you used excessive force. Your lack of judgment and your poor decisions defy your tenure as a Miami Beach Police Officer of 19 years."