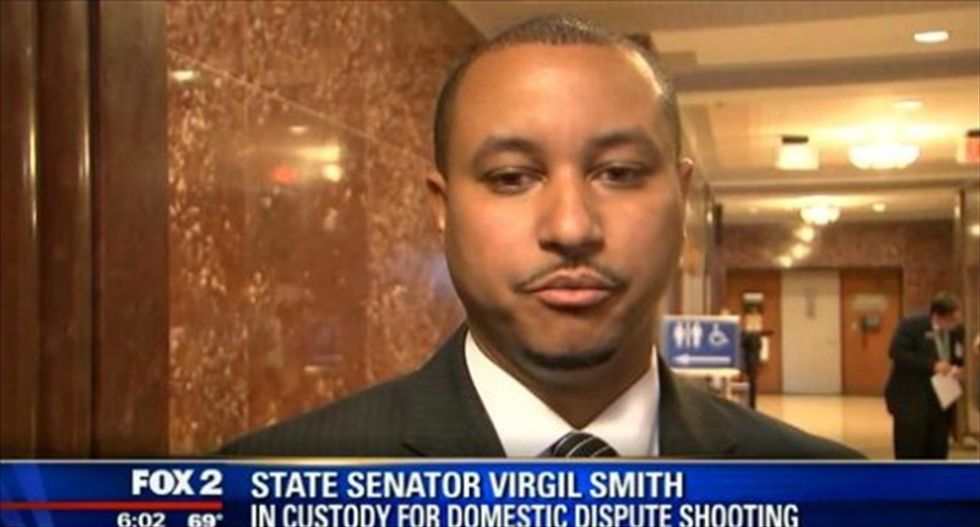 A Democratic legislator from Michigan is accused of attacking his ex-wife and shooting her car during a late-night confrontation at his home while he was naked, WJBK-TV reported.

State Sen. Virgil Smith was arrested early Sunday morning at his Detroit home after police were notified by his ex-wife, identified as Anistia Thomas. Thomas was not hit, but Police Chief James Craig said her car had "what appeared to be ten rounds fired into it" after the encounter.

According to the Detroit News, Thomas told investigators that Smith invited her to spend the night with him, only to meet her at the door in the nude alongside an unidentified woman. Smith's marriage to Thomas was annulled in 2009.

Thomas said that what began as a verbal argument between her and the senator turned violent when he "shoved her face into the carpet" before hitting her in the face several times. Then, she said, a gun-toting Smith chased her as she ran out of the house before firing on her car. She contacted police from a friend's house nearby.

For his part, Smith told police that Thomas initiated the encounter by "banging on [his] bedroom window." When he opened the front door, he said, Thomas "kicked the door open" and pushed him aside before going into the bedroom and trying to attack the other woman.

That touched off a struggle between the two, Smith stated, that ended when he shoved her out the door. Smith does not dispute shooting Thomas' car. However, he said he did it after seeing Thomas "throwing a chair at his house windows."

According to a police report, the lawmaker "stated he did the most stupid thing in his life" while admitting to using the gun.

Smith, a former member of the state House, has been in his current office since 2010. The Detroit Free Press reported pleaded not guilty on Tuesday to charges of domestic violence, possessing a firearm during the commission of a felony, felonious assault, and malicious destruction of personal property worth $20,000 or more. He is currently free on bond and due back in court on May 22, while under orders to have no contact with Thomas.

Watch WJBK's report, as aired on Monday, below.