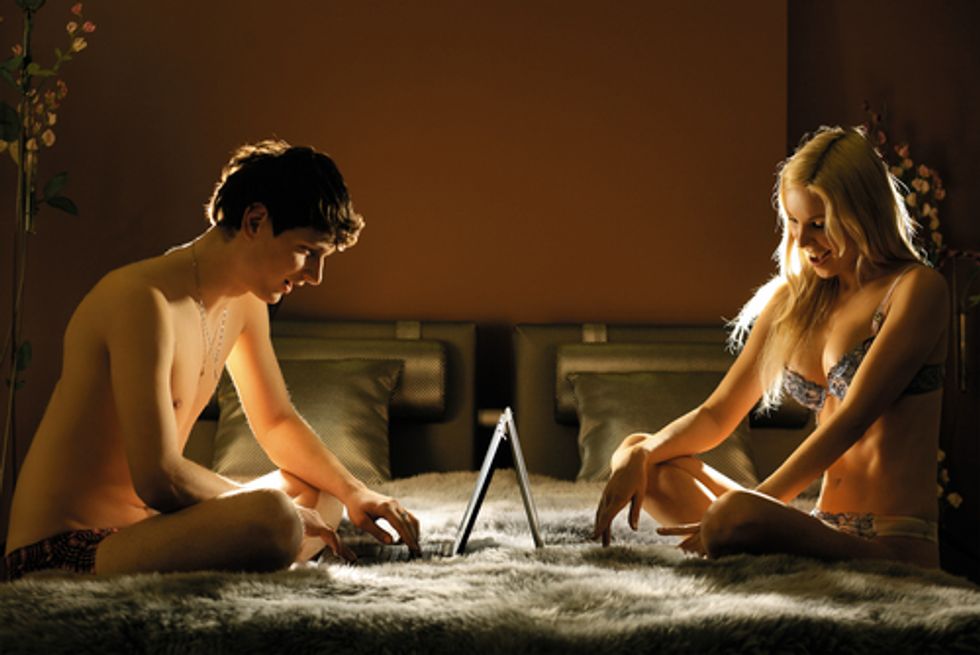 Amid our rapidly changing attitudes about sex, a seeming contradiction has emerged: Millennials tend to be cool with casual relations  -- but they’ve probably had fewer partners than lovers of previous generations, new research suggests.

Jean Twenge, a psychology professor at San Diego State University, analyzed data from a survey of more than 33,000 adults in the U.S. to measure the country's shifting sexual landscape.

Americans in the "Greatest Generation," or those born between roughly 1901 and 1924, slept with an estimated average of three partners during adulthood, according to a study published Tuesday in the Archives of Sexual Behavior. Baby Boomers have picked up the pace, averaging about 11 partners. Generation X has nearly kept up with 10.

And Millennials, generation of Tinder and "I'm just not looking for anything serious right now," can expect an average of just eight.

Now these are just projections, as most millennials have a lot of living left to do and maybe they’ll be switching partners more in their middle age than Boomers and Gen Xers did or are going to do. (Worth remembering that the tail end of Gen X isn’t that old, you know: late 30s, early 40s.) But honestly, probably not. While people marry later in life than they used to, it's often after a lengthier, uh, courtship than previous generations had, including a long stint of cohabitation. (Weddings now often feel to me like they're more a celebration of an existing relationship than really the beginning of something.) The average number of sex partner changes drops off dramatically for people once they get into their late 20s/early 30s, because people start settling down into long term relationships. It's not that it stops completely---people break up, get divorced, cheat---but we're talking averages here, and so it follows that there's a major slowdown. There's no reason to think that will change for millennials.

Danielle Paquette, who wrote this up for the Washington Post, frames this revelation as happening despite the open-mindedness of this generation:

But millennials seem to be less judgmental about other people's sex lives. Sixty-two percent think there's nothing wrong with sex before marriage, according to Twenge's calculations, and 56 percent have no issue with same-sex relationships.

That may stem from a cultural tendency to embrace individuality, research shows. “They’re more likely to say, “I’m going to do my thing," Twenge said, "and 'you do your thing.'”

So basically, the argument is that millennials are defining a slightly more chaste lifestyle as "doing my own thing". Eh, I actually think it's not that. It's slightly more complicated than that, I'd argue. I think the open-mindedness about sex* is actually why millennials have fewer partners.

I know, that's really counterintuitive. A few years ago, I personally would have rejected that idea. But having reported on sexual health research for years now, I've come around to realizing that the relationship between personal values and behavior is a lot more complicated than people realize. If a behavior---such as having a lot of partners---is stigmatized, that often compels a lot of people to do it more. Not everyone who sleeps around is a bon vivant who just enjoys living life to its fullest, though god knows that I know plenty of people like that. But my personal life experiences are rarified in this country---I've spent my entire adult life in liberal urban enclaves. The research on sexual values and behaviors in this country has led me to conclude that a lot of people live lives that are not in accordance with their values. They say sleeping around is wrong and they do it anyway. Some may do it because they think it's wrong. The wrongness of it thrills them.

(To be clear, I don't think it's wrong! I'm just talking about what other people believe.)

So yeah, I think as casual sex loses its transgressive thrill, you are definitely going to see less hooking up with strangers for the hell of it. But because single people do have needs, people are still going to have casual sex, but they're going to go about it differently. In fact, we're already seeing that, with the invention of the term "friends with benefits". Sex with someone who knows you and your body is more satisfying, after all. One night stands, in the past, were often the result of shame, an inability to be around someone who you'd done this "transgressive" thing with. But if the sex was good and you don't feel bad about it, you're probably going to go back to that well a lot. FWBs and booty calls are replacing the singles bar and the one night stand, leading to fewer partners overall.

But also, I think that one interesting side effect of being open-minded and chill about sex is that it also makes it easier to hold a relationship together. Most people still end up, eventually, in monogamous relationships. If you're in a monogamous relationship, staying sexually interested and satisfied takes a willingness to talk about your desires and to try new things. So, as counterintuitive as it may seem, being sexually liberated probably means that you have less of an urge to stray once you're in a relationship, because you are less dependent on that new relationship energy to get your motor running.

Of course, all of this will not do anything to stop Fox News from running, for the Boomer audience, one scare story after another about kids these days and all the sex they're having. Nor will it stop the assault on contraception and abortion, which is a direct result of the older generation** getting increasingly bent out of shape over the fact that people keep being young and having sex while they are getting older.

*Which is totally relative to previous generations and not to some absolute standard. I would say that my gut sense is that it's nuts that only 62 percent think premarital sex is okay, when odds are that almost all of them will do it. It's a reminder that this country, while getting better, is still extremely puritanical.

**Yes, yes, liberal Boomers. I know not all Boomers are sex negative. Not even close. But the ones that are sex negative are running the Republican Party and setting its agenda, which is apparently to force everyone younger than themselves to stop having sex forever. Also, it's not just the Boomers, either. I'm seeing plenty of Gen Xers start to shake their walking sticks at kids these days. See: Gavin McInnes.