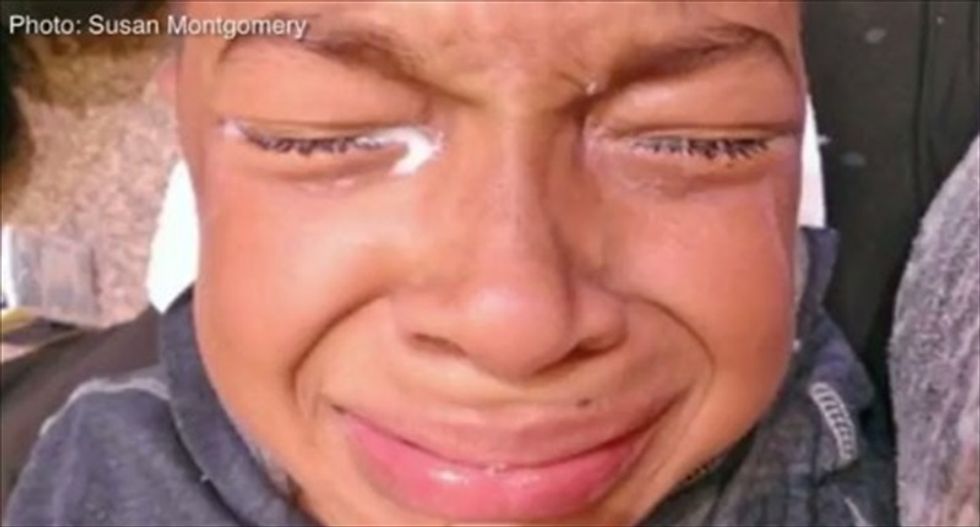 A Minneapolis woman accused local police of pepper-spraying her 10-year-old son in the face while accosting a small group of demonstrators protesting excessive force by police on Wednesday night.

The boy's mother, Susan Montgomery, told the Minneapolis Star-Tribune that the officer maced her son, Taye, after driving up to her and a group of 10 protesters without warning.

"I was thinking, 'This guy is gonna run us over,'" she said. "People started running. It seemed like he was mad at that point."

The unidentified officer then stopped his vehicle, she said, before he "just jumped out of his car and started spraying everybody. The Mace just happened. It hit everybody in that area."

The incident happened during a demonstration criticizing prosecutors in Madison, Wisconsin for not filing charges against the officer who shot and killed 19-year-old Tony Robinson this past March.

The protest reportedly drew around 100 people overall, including the group standing near Montgomery and her son.

Taye told told KMSP-TV that the incident "happened so fast," recalling that a woman in the crowd was saying, "park the car, park the car."

"Then I couldn't find my mom and this cop pulled up with sirens, and then started Macing everyone, didn't give us no warning or nothing," he said.

Cellphone video taken during the protest shows an officer -- purportedly the one who sprayed the boy -- using pepper spray on the crowd. Taye can also be heard shrieking, which his mother said happened as he was being hit by the spray.

Authorities said protesters were jumping on cars and trying to open car doors during the demonstration. But Montgomery said that the officer also sprayed demonstrators who were trying to tell him that he had hit Taye.

The boy was taken to a nearby hotel, where demonstrators poured milk into his eyes to calm the irritation caused by the spray. KMSP reported that, according to Montgomery, a vision test on Thursday showed he was experiencing "some issues."

Mayor Betsy Hodges and Police Chief Janeé Harteau asked witnesses to come forward during a brief statement on Thursday, while announcing an investigation into the incident.

Meanwhile, police Lt. Bob Kroll, who was recently elected head of the local police union, called on residents not to "jump to conclusions" while declaring that police were not at fault.

Montgomery, who said she has spoken to both Harteau and Hodges, said she has taken Taye to protests since he was a toddler.

"When I'm taking him to these things, I know I'm going to get flack," she said. "I already have family members that don't agree. I've gotten that for years, but my children mean the world to me and I want those colors to shine out, that they have a voice and their life matters."

Another demonstration is scheduled for Thursday.

Watch KMSP's report on the incident, as aired on Thursday, below.