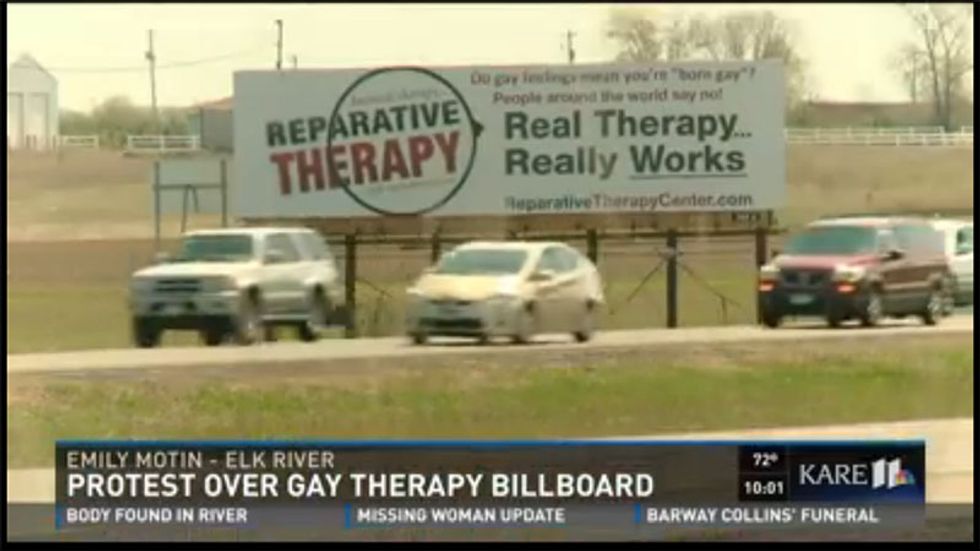 A group of high school students held a protest on the steps of Minnesota State Capitol Saturday to protest a billboard advertising for gay conversion therapy service, reports KARE.

"We noticed the sign a few weeks ago and we knew instantaneously that it needed to be taken down. It's not okay," said 17-year-old Emily Motin, an organizer of the protest.

The billboard, placed near Highway 10 in Elk River, advertises "reparative therapy" by David Pickup, a licensed marriage and family therapist who practices in California and Texas.

"Do gay feelings mean you're 'born gay'? People around the world say no!" it reads, claiming that the therapy "really works."

Pickup said that he used talk therapy to help people with homosexual feelings, often due to abuse, who wanted to be their heterosexual self.

However, the teens at the protest disagree.

"We've researched the therapy and it has been shown to be horrible and tortuous to its patients," Motin said.

She and six other students held their protest on the steps of the State Capitol, holding signs saying, "Gay is okay" and "Gay kids need love, not a cure." Originally, they planned to protest near the billboard, but later decided to do it at the Capitol.

A state-to-state campaign to ban conversion therapy has gained a powerful ally recently. President Obama expressed support for banning psychiatric treatments for gay and transgender youth that seek to change their sexual orientation or gender identification.

According to the National Center for Lesbian Rights, which is a leader of a multistate campaign to end conversion therapy, Colorado is one of 18 states where bans were being considered this year. California, New Jersey and Washington, D.C. have such bans in place, and similar bans can be enacted this year in a handful of other states such as Oregon and Illinois, according to AP.

There have also been efforts by some lawmakers in Minnesota to ban conversion therapy, but the organization that helped place the billboard, Minnesota's Pro Family Forum, which is dedicated to "Sexual Orientation Change Efforts" for adolescents, is against such a ban.

No lawmakers was on the Capitol to hear the protest on Saturday, but the teens said that they'll protest again.

Watch video below, courtesy of KARE.