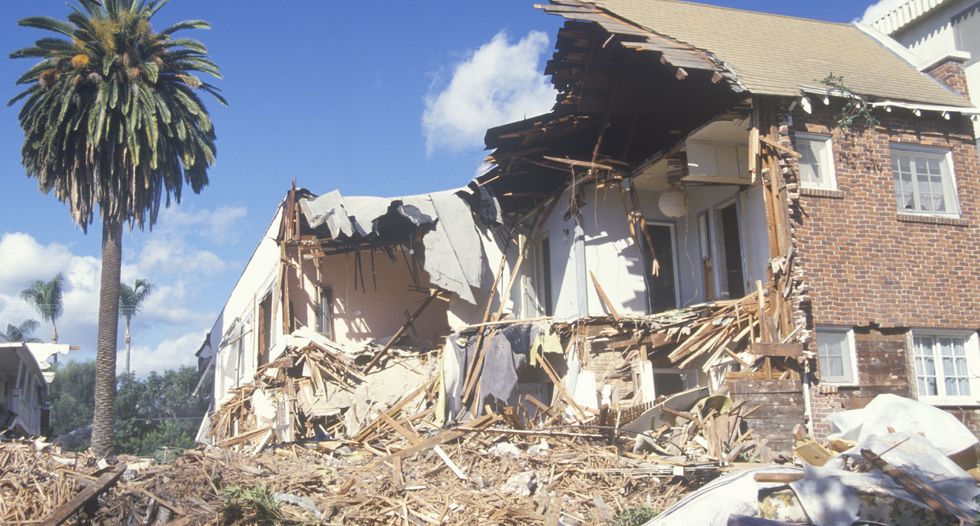 A Los Angeles home destroyed in a 1994 earthquake (Shutterstock)

A mild, magnitude 3.8 earthquake rattled the greater Los Angeles area early on Sunday morning, jolting many residents from sleep before dawn, but authorities said no damage or injuries were reported.

The relatively shallow quake struck shortly after 4 a.m. local time and was centered in the Baldwin Hills area about 7 miles southwest of downtown Los Angeles, according to the U.S. Geological Survey.

Shaking described by the USGS as light or weak could be felt as far away as Maricopa, California, about 100 miles to the northwest, the agency said. The quake's magnitude was initially measured at 3.9, but was later downgraded slightly.

The Los Angeles Fire Department declared the region safe after its 106 neighborhood fire stations completed a survey spanning more than 470 square miles of the metropolitan area, noting in a Twitter posting that "no damage has been reported."

"The Earthquake in LA was just long enough to wake you up and remind you that you didn't do anything you're supposed to do during .. an .. Zzz," one individual wrote.

Sunday morning's tremor was the third 3.0-plus quake to occur this year along a northern stretch of the so-called Newport-Inglewood seismic fault zone. Two others, measuring 3.3 and 3.4, respectively, struck the same area on April 13 and April 30, the Southern California Seismic Network said.

Such quakes are commonplace in seismically active California and typically generate too little ground motion to cause property damage.

By contrast, a stronger, 4.2 quake struck on Saturday at midday near Kalamazoo, Michigan, producing weak shaking that could be felt as far as Detroit, Grand Rapids, Michigan, Toledo, Ohio and South Bend, Indiana, though no damages or injuries were reported in those areas, either.