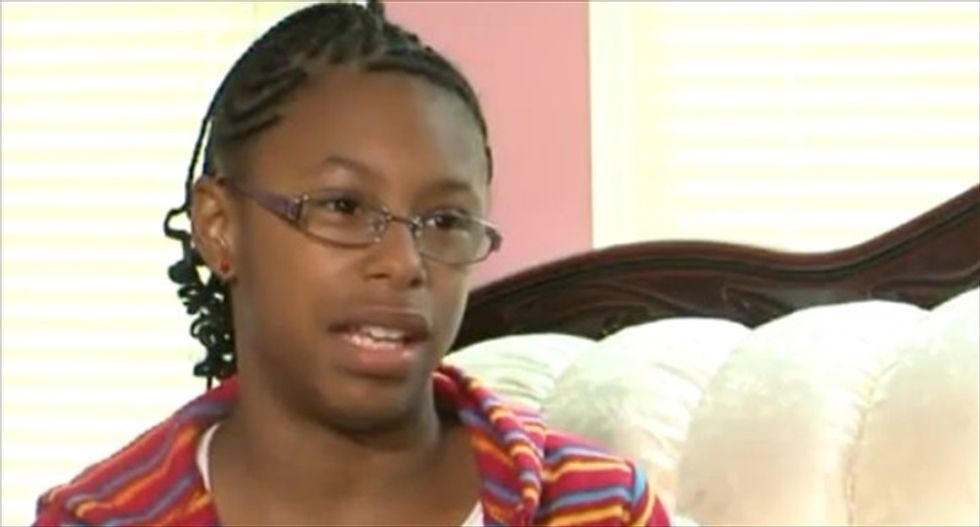 11-year-old Maurissa Rushing says a bus driver told her that she and her best friend would 'go to hell.' [WDAF-TV]

An 11-year-old Kansas City girl's family has hired an attorney after her charter school allegedly refused to discipline a bus driver for harassing the girl and her best friend last week, WDAF-TV reported.

"She said that we are gonna burn in hell real bad," Maurissa Rushing recalled. "I didn't expect it to happen."

Rushing said the unidentified bus driver held the two girls behind after taking them and other students to Pathway Academy, a local charter school. The driver then allegedly rebuked the two girls for playing a game in which they "chase" each others' fingers up their arms, and said Rushing was "gay" for touching her friend too much.

"She was talking really bad to me and I didn't like that," the girl told WDAF before brushing back tears, adding, "She's just been the most horrible bus driver I've ever had."

Rushing said she informed school officials of the driver's behavior immediately after being allowed to leave the bus. However, her mother Patricia Rushing said neither the school nor the driver's employer -- a charter bus rental company called First Student -- ever contacted her regarding the incident.

"I feel like she was all day by herself, dealing with it," the girl's mother said. "How do you deal with that at 11?"

While First Student reportedly fired the driver in advance of an internal investigation, school officials told WDAF that it was the bus company's responsibility to contact Rushing's family.

Watch WDAF's report, as aired on Thursday, below.