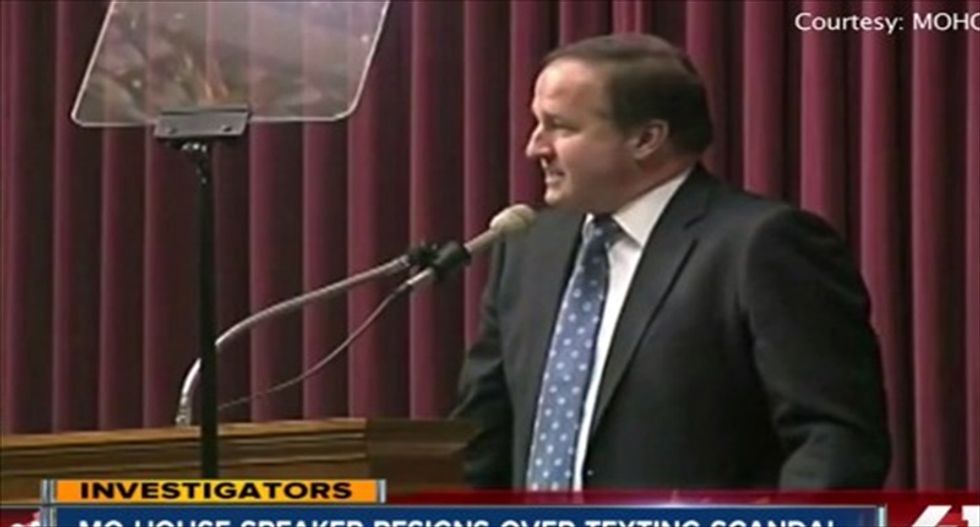 The Republican speaker of the Missouri House said on Thursday he is resigning from office, the day after local media revealed he had exchanged sexually suggestive text messages with a college intern.

John Diehl Jr., a married lawyer who represents a suburban St. Louis district, acknowledged in a written statement that he had made a "serious error in judgment" in sending the messages.

"It was wrong and I am truly sorry," said Diehl, who was first elected to the House in 2008.

The former intern is a college freshman, according to the Kansas City Star, which published the messages. The discovery of the text messages followed a decision by Missouri Southern State University to end its Capitol internship program a month early, the newspaper said.

The Star did not name the intern or say what school she attended.

"Our thoughts go out to the families who have been affected by the speaker's conduct," Nixon said in a statement.

Diehl said in his statement that he was proud to have led the General Assembly to the largest Republican majority in state history. On his Facebook page, he noted that he sponsored an initiative allowing Missouri residents to voice their opposition to the national healthcare plan.

(Reporting by Mary Wisniewski in Chicago; Editing by Eric Beech)

Watch a report on Diehl's resignation, as aired on KSHB-TV on Thursday, below.