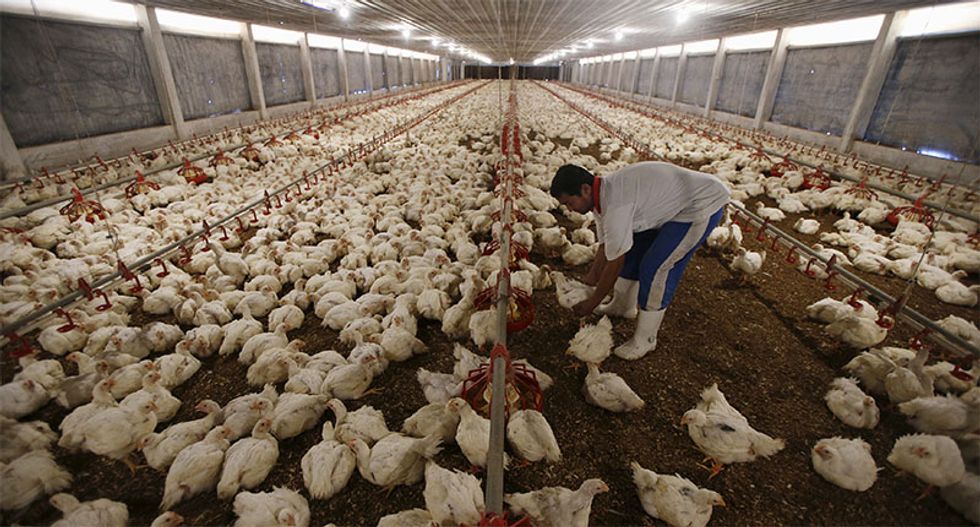 In barns filled with classical music and lighting that changes to match the hues outside, rows of chickens are fed a diet rich in probiotics, a regimen designed to remove the need for the drugs and chemicals that have tainted the global food chain.

As food giants face growing pressure to offer healthier produce, Southeast Asian poultry firm Kee Song Group says its use of "good" bacteria in feed and water means it can meet one the industry's biggest challenges: how to mass produce drug and hormone-free poultry at a reasonable price.

A series of scandals in the last few years from melamine-tainted milk powder in China, horse meat supplied as beef in Europe and growth drugs causing lameness in U.S. cattle has triggered a consumer backlash over food standards and safety.

Recently, Tyson Foods Inc pledged to eliminate the use of human antibiotics in chicken by 2017, one of the most aggressive timetables yet by a U.S. poultry firm.

The top American poultry producer, which supplies fast-food chains such as McDonald's Corp , is among a number of groups globally incorporating probiotics into feed.

"For meat producers, reputation risks are becoming stronger driving companies to focus on safe ingredients specially in Europe and the United States," said Pawan Kumar, director for food and agricultural research at Rabobank in Singapore.

The firm annually produces around 4 million drug-free birds at its Malaysian farms in Yong Peng, 125 km north-west of Singapore, and aims to expand sales to China and the West.

"Probiotics, either alone or in combination with essential oils and organic acids, are at the forefront of international approaches to replace antibiotics," said Wayne Bryden, Professor of Animal Science at the University of Queensland.

Probiotics populate the gut with healthy bacteria in a bid to curb bad bacteria, while oils and organic acids are also often included in feed to aid digestion.

A team at the Australian university, partly funded by feed maker Ridley AgriProducts, have found in preliminary trials that using a probiotic can double the efficiency of use of protein from feed to boost weigh gain in livestock.

An estimated 80 percent of antibiotics used in the United States are administered to livestock with the use expected to surge by two thirds globally between 2010 and 2030.

Scientists are worried the practice could spur antibiotic-resistant superbugs.

McDonald's has also pledged to eliminate chickens fed on human antibiotics at its U.S. restaurants and is looking at similar steps in Asia.

"In Asia Pacific, we will be working with our supply partners and relevant experts to implement this enhanced measure," a company spokesperson said via email.

While demand for healthier products is increasing fast in the West, some experts say that in parts of Asia customers will not be prepared to pay more for drug-free poultry, though China could be a promising market after high-profile food scares.

In Kee Song's Malaysian poultry farm, 20,000 chickens rest on saw dust in the dimly lit barns, with feed and water laced with probiotics being automatically pumped into feeding pans.

As well as playing Mozart, lighting is used in a bid to keep the birds tranquil with neon blue lighting turned on when the birds are taken for slaughter.

"Even the droppings don't smell," added Ong, who has been a vegetarian for 17 years after a stay at a Buddhist temple.

Growth hormones mixed with feed can also produce oversized breasts and wings that underdeveloped legs struggle to support for more than a few steps.

Chia Tet Fatt, a molecular geneticist who previously was a professor at Singapore's Nanyang Technological University teamed up with Kee Song to produce the probiotic used, lactobacillus, and confirmed chickens were not fed any drugs or antibiotics.

By not using drugs, the poultry farms need to maintain stringent cleanliness measures to avoid the risk of infection and it takes three days more than conventionally produced chickens to attain a commercially viable weight of 1.8 to 2.0 kg.

As well as supplying supermarkets, Kee Song also sells to some restaurants in Singapore, including French restaurant Cocotte, where the chicken is used for a signature dish.