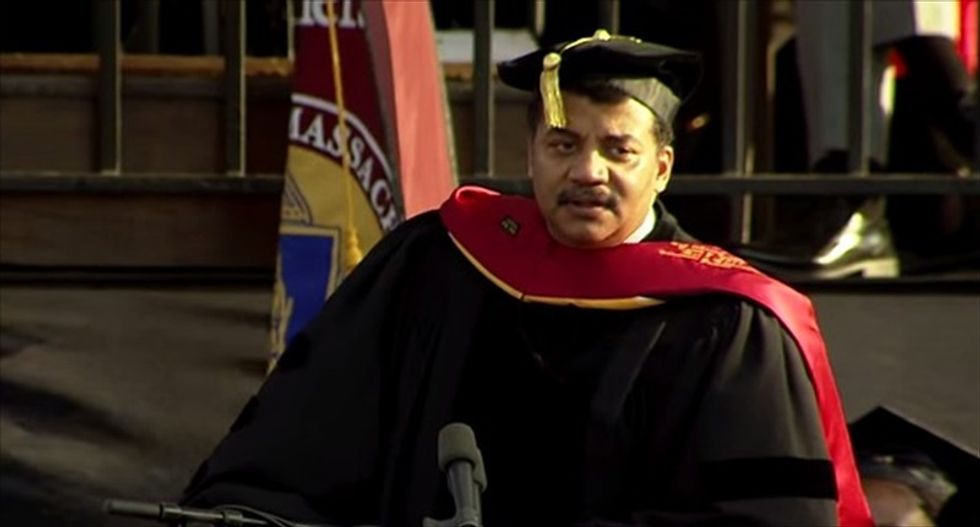 Neil deGrasse Tyson addresses the graduating class at the Univ. of Massachusetts-Amhurst on May 8, 2015. [YouTube]

Astrophysicist Neil deGrasse Tyson urged graduates at the University of Massachusetts-Amhurst not to give in to the urge to blame lawmakers -- particularly those who resist scientific truths -- for the world's problems, Mic reported.

As an educator, he said, he teaches people about the hows and whys of science for the sake of boosting "the engines of tomorrow's economy." At one point, he exclaimed to the assembled graduates, "Science matters!" and asked them to consider their own life expectancies as proof.

"Cavemen and women, they had clean air, fresh water, their food was free-range, yet their life expectancy was 35," he argued. "Something else matters that improves your life expectancy than just the search for clean air and clean water. There's more going on in our lives brought to you by innovations in science and technology that improves your health, your wealth, your well-being."

He also denounced the ramping up of government surveillance, as evidenced by the National Security Agency's massive data collecting activities, telling the audience that since they were "next up in the batter's box," it was up to them to remedy the situation.

"We used to say we are the leaders of the free world here in America: 'Russia, they're not free. They have to show their IDs everywhere they go. That country spies on their own citizens.' I remember saying that about the Soviet Union," deGrasse Tyson said. "Now, there are cameras everywhere in the streets, and I don't know what that means. If the KGB had the surveillance that America has today on its own citizens, they would totally dig that back in the Cold War. So I don't know what has happened to the world."

The university posted highlights of deGrasse Tyson's speech, which can be seen below.

A separate recording of deGrasse Tyson's entire speech, filmed from the audience, can be seen here.