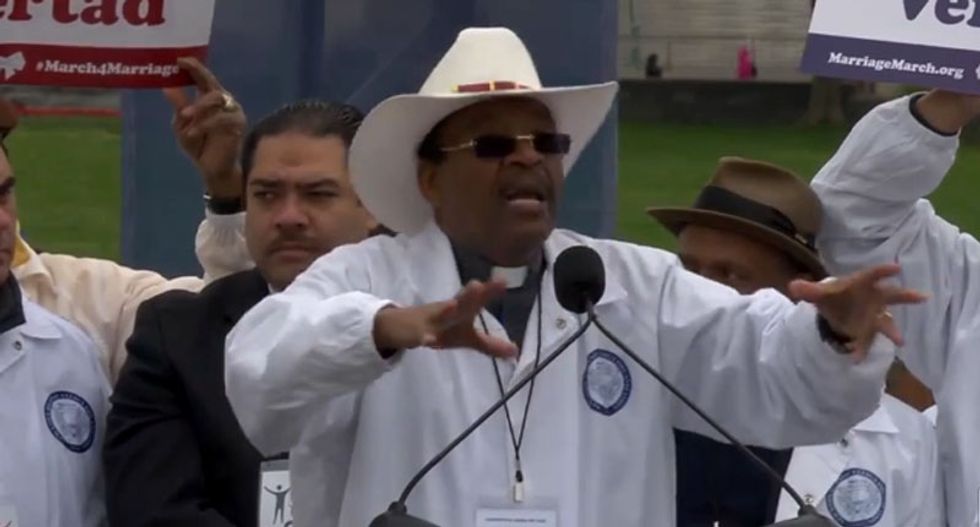 State Senator Ruben Diaz at the March for Marriage (Screenshot)

A New York state senator says same-sex marriage should be outlawed because it conflicts with his religious beliefs.

Speaking at the third annual March for Marriage in Washington, D.C. in late April, state Sen. Ruben Diaz (D-Bronx) said he was a proud opponent of same-sex marriage.

"I am the only elected official here and I belong to the Democratic Party of New York in New York City, a liberal state, where everybody is liberal, where everybody goes with the liberalism, but me I'm the senator in New York and I keep saying that marriage between man with man is not biblical," he said, speaking through a translator.

"We're here to say we put our position, everything God gave to us, to the feet of Jesus to let the Lord do what he will, what he wants, but never, never, never we shall deny Christ because he's our saviour, he's our redeemer, because he gave his life for us, because he is coming back, he will reign -- it doesn't matter what the courts say -- Christ lives."

The Supreme Court is expected to rule in June on whether same-sex marriage is a constitutional right.

Diaz said Supreme Court Justices Ruth Bader Ginsburg and Elena Kagan should both recuse themselves from the case because they had participated in same-sex wedding ceremonies.