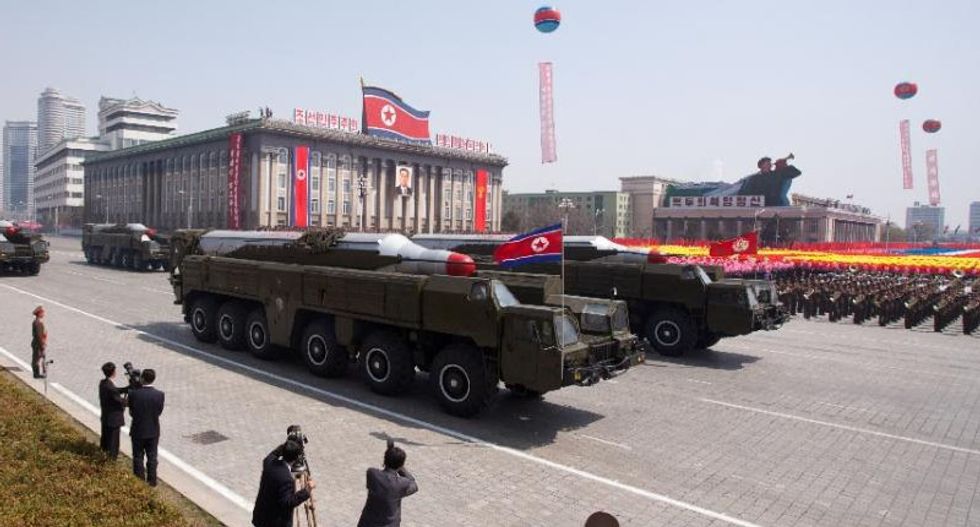 North Korea says it has succeeded in miniaturising its nuclear weapons, a development that could allow them to be delivered by missile (AFP Photo/Ed Jones)

North Korea ramped up its nuclear threats on Wednesday, boasting of its ability to deliver miniaturised warheads on high-precision long range rockets, in a clear warning to the United States.

At the same time, it denounced "reckless" remarks made in Seoul this week by US Secretary of State John Kerry, and cancelled an invitation to UN Secretary General Ban Ki-Moon to visit a joint industrial zone on its side of the border with South Korea.

Pyongyang has been flexing its advancing military muscle of late, most recently announcing it had successfully test-fired a submarine-launched ballistic missile (SLBM).

"It has been a long time since we began miniaturising and diversifying our means of nuclear strike," the commission said in a statement carried by the North's official KCNA news agency.

"We have also reached the stage where the highest accuracy rate is guaranteed, not only for short- and medium-range missiles but long-range missiles as well," the NDC said.

Reducing the size of a nuclear warhead to the point where it can fit on a missile would be a major leap forward in establishing a genuine deterrent, and Pyongyang has claimed progress with miniaturisation before.

In January the South Korean Defence Ministry said it believed the North's ability to miniaturise a nuclear device had reached a "significant" level. The top US homeland security commander, Admiral William Gortney, said last month the North was already capable of mounting a warhead on a missile.

But other senior officials in both countries have questioned such assessments, and independent analysts on Wednesday stressed that the North's claims were often overblown.

"There are differences between their statements and their actual operational reality," Daniel Pinkston, a Seoul-based senior researcher of the International Crisis Group, told AFP.

Cho Han-Bum, an analyst at the Korea Institute for National Unification, said Pyongyang was "too cash-strapped" to perfect such intricate technology as miniaturising a warhead.

"I find the claim hard to believe," he said.

Experts have voiced similar doubts over the recent SLBM test, suggesting it was probably not submarine-launched at all, but likely fired from a submerged barge.

And it was probably an "ejection test" in which the missile is launched underwater, breaks the surface and then falls back after a few seconds of partial fuel burn.

But scepticism over the North's claims for its nuclear weapons and ballistic missile capability are heavily outweighed by genuine concern at the expansion of both programmes.

A recent report by US researchers warned that North Korea could, in a worst-case scenario, possess 100 nuclear bombs arms by 2020.

North Korea carried out nuclear tests in 2006, 2009 and 2013 and has an extremely active ballistic missile development programme, even if expert opinion is split on how much progress it has made.

During his visit to Seoul Kerry had denounced Kim Jong-Un's "egregious" leadership, saying he had fuelled regional tensions with repeated "provocative, destabilising and repressive actions".

The North Korean Foreign Ministry responded Wednesday, calling Kerry's comments those of "a loser admitting the total failure" of US policy towards Pyongyang.

Separately Wednesday, Pyongyang cancelled without explanation an invitation for Ban, who is also in Seoul, to visit the Kaesong joint industrial area which lies 10 kilometers over the inter-Korean border.

Had Thursday's visit gone ahead, Ban would have become the first UN secretary-general to set foot in the isolated state for more than 20 years, since Boutros Boutros-Ghali in 1993.

"This decision by Pyongyang is deeply regrettable," the UN chief, a former foreign minister of South Korea, told a forum in Seoul.

"However, I as the secretary-general of the United Nations, will not spare any efforts to encourage (North Korea) to work with the international community for peace and stability on the Korean peninsula and beyond."

Speaking at an Asian leadership forum in Seoul on Tuesday, Ban had warned that continued North Korean provocation risked fuelling tensions and a possible arms race across the region.