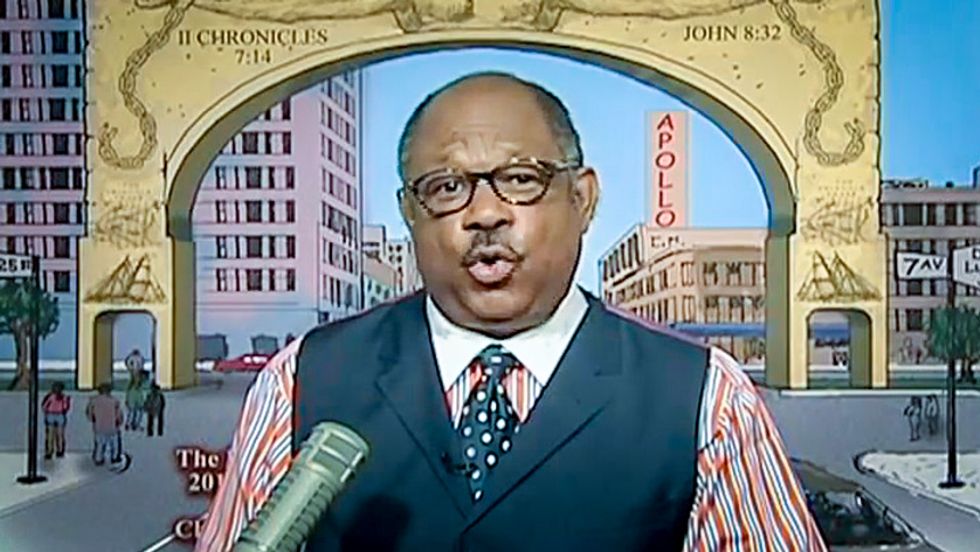 ATLAH World Missionary Church Pastor Dr. James David Manning asserted this week that Baltimore residents rioted after the death of Freddie Gray because black people were not ready for a black president.

In his Wednesday video broadcast, Manning said that he didn't have any "hatred for the idiots who voted for Obama," but "sometimes when you speak the truth it sounds like or feels like hate."

According to Manning, black people did not deserve a black president because "young black men" had not accomplished anything, and instead believed that they were "owed" government benefits because their ancestors were slaves.

"Hamite [or black] people were saying we should have a black president simply because we were once slaves in this nation," he said. "It's like saying because I went swimming one day, I should be the captain of the world's largest aircraft carrier. You know nothing about a boat. You just got wet swimming one day."

The pastor declared that "the proof is in the pudding."

"If you can become the president of American without every proving that you should be and a nation now has a leader that comes from absolutely out of slavery, and not our of an understanding then why would black youth want to complete high school?" he asked. "We don't have to earn our way in life anymore, we can demand simply because we were slaves."

But Manning said that the real problem was that white liberals were allowing blacks to have power "because they were once slaves."

"What we see now, you can attribute it to the ignorance and the barbarism of black people, but you can also surely know that it's been unleashed by white liberals and Fox News watchers that have turned loose this plague of black people with unaccountability on America," he concluded. "Don't blame blackie for this. This one we're going to lay at the feet of whitey."

Watch the video below from ATLAH World Missionary Church, broadcast May 13, 2015.