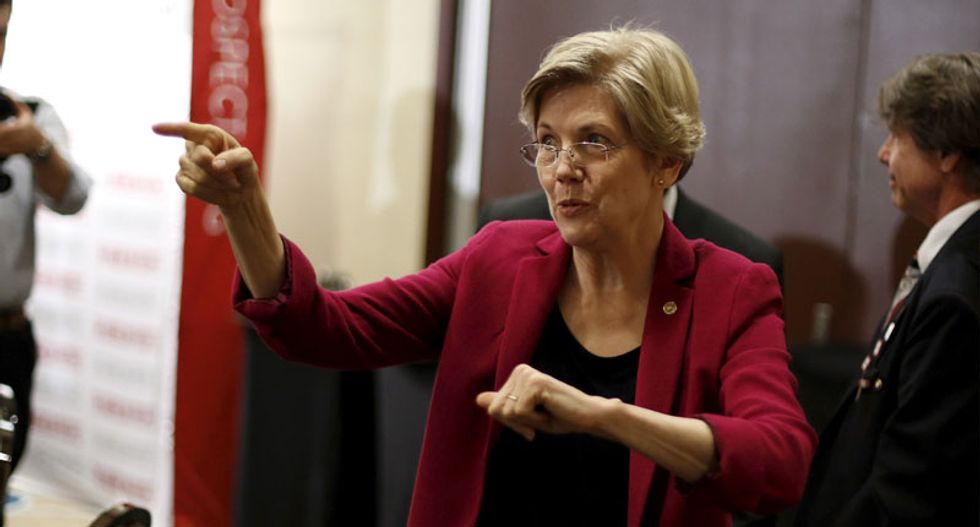 U.S. Senator Elizabeth Warren (D-MA) departs after her remarks at an American Prospect forum on the role of journalism in progressive politics, in Washington May 13, 2015. REUTERS/Jonathan Ernst

President Barack Obama's swing at liberal favorite Elizabeth Warren has stirred a controversy that may complicate the chances of a pan-Pacific trade pact and could make it harder for the White House to get its way in future legislative battles.

Facing stiff opposition to the trade deal from sections of his own Democratic Party, Obama launched a personalized criticism of Warren's efforts to lead the fight against giving the administration "fast-track" negotiating authority.

It was an approach that appeared to elevate the Democratic senator from Massachusetts, already a favorite of the party's left wing for her work on consumer protection and Wall Street reforms, and energize her supporters.

On Wednesday, the day after Senate Democrats at least temporarily blocked debate on the fast-track trade bill, the White House was forced to respond to charges the president was sexist in calling out Warren by her first name.

In an interview with Yahoo News last week, Obama had referred to Warren as "Elizabeth" while accusing her of political grandstanding and being "absolutely wrong" on trade.

Warren has not responded directly to the president's comments.

By stoking a personal battle with Warren, Obama risks making her a more dangerous rival in Congress, giving her more clout to push the president and 2016 Democratic presidential front-runner Hillary Clinton to the left on issues such as income inequality, minimum wage hikes and efforts to rein in Wall Street.

Republicans, unlikely political bed-fellows with Obama on the trade deal being negotiated with other Pacific Rim countries, pounced on the chance to highlight the Democratic Party feud.

Democratic opponents of the pact, who argue it could be used to undercut Wall Street reforms while weakening U.S. regulations, said the Obama vs. Warren rivalry had raised public consciousness on trade.

"The president miscalculated in making this about Elizabeth Warren, that backfired badly. It only served to raise awareness of the issue and drive people away from his position," said Chris Kofinis, a Democratic strategist who has worked with labor unions opposed to the pact.

"It never makes sense to make these kinds of issues personal," he said.

In the Yahoo interview, Obama said Warren's arguments "don't stand the test of fact and scrutiny."

"The truth of the matter is that Elizabeth is, you know, a politician like everybody else," Obama said. "She's got a voice that she wants to get out there. And I understand that."

After the Senate vote on Tuesday, Ohio Democratic Senator Sherrod Brown implied Obama had disrespected Warren and been sexist in calling her out by her first name "when he might not have done that for a male senator. Perhaps I've said enough."

"I think that the president has made this more personal than he needed to," said Brown, a staunch critic of the trade deal.

White House spokesman Josh Earnest denied sexism played a role in Obama's comments, noting Warren used to work in the administration and the president had a personal relationship with her.

He told reporters that Obama had often called senators, both male and female, by their first names in public.

Earnest said he believed Brown would eventually offer an apology for his remarks. Brown did not immediately embrace that suggestion.

"I don't want this to be personal either way," Brown said on MSNBC when asked if he had an apology for the president.

After Tuesday's setback, Senate negotiators managed to strike a new deal on Wednesday that would set up a vote on "fast-track" trade authority with worker assistance provisions, along with votes on two other trade bills sought by Democrats.

The fast-track authority is a key to the administration's ability to finish the 12-nation trade pact, a centerpiece of Obama's agenda for the final two years of his presidency.

But Senate Republican Leader Mitch McConnell, a staunch Obama foe who has joined with him on the trade issue, was happy to highlight the Democratic divisions exposed by Obama's criticism of party liberals.