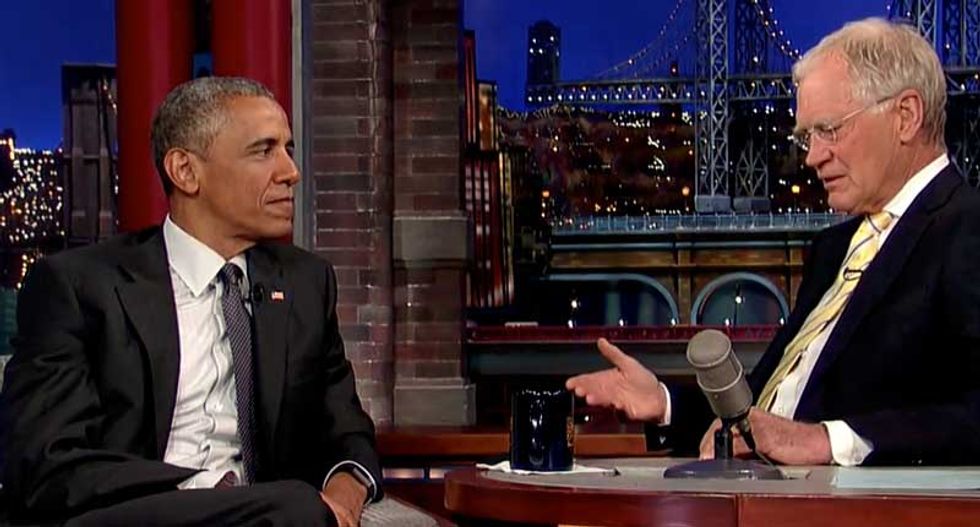 Obama, himself finishing his second and final term in office, addressed the recent riots in Baltimore, a Pacific trade pact he is trying to push through Congress and thoughts on his post-presidential future in his eighth and final interview with CBS's Letterman on the "Late Show."

Letterman, admitting to jitters over interviewing the US president, said there are days when he looks at his schedule after he wakes up and thinks, "Oh, God."

Obama joked: "Are you saying that is how you felt this morning? This interview isn't starting well."

Just days after his wife Michelle appeared on the same show as Letterman prepares to retire late this month after 33 years on the air, Obama both sparred playfully and talked serious policy stuff in the roughly hour-long chat.

"First of all, I know you like Michelle a bit more than me," Obama said of his wife, who has appeared on the Letterman show four or five times, according to Letterman.

Letterman, 68, noted that on that show the first lady was accompanied by a Marine Corps band led by "a guy in a huge bear-skin hat."

Obama talked about the work his wife is doing to help US veterans returning from the wars in Iraq and Afghanistan to adjust to civilian life and get the help they need in finding health care and employment.

Obama also spoke at length about the riots that broke out last week in Baltimore, just an hour's drive from Washington, after the funeral of a young black man who died of a spinal injury sustained apparently while in police custody last month. Six officers have been charged.

He said there are a "handful of police who are not doing the right thing" in America and that in many inner cities there is no trust between police and the local community.

But most police are doing their best and the broader problem is to address poverty and unemployment that fuels anger among African-Americans, Obama said.

"What you have are pockets of poverty, lack of opportunity, lack of education all across this country, and too often we ignore those pockets until something happens, and then we act surprised," the president said.

He added that he though the vast majority of Americans want to solve the problem.

"There are cities across the country who work with police, clergy and others and say we want to get beyond the status quo and I'm confident we can see improvement," Obama said.

Letterman, whose 'Top 10' segment for the night was 'Questions dumb guys ask the president', interjected: "Is this the first country you've presidented?" Laughter and applause erupted from the audience.

Obama: "It is, I suspect, the first and last country that I'm president-ing. Unlike late-night talk show hosts, I am term-limited."

On the Pacific trade deal that would include 12 countries but not China, Obama said the US could not close itself off from the rest of the world and had to be able to compete.

The president concluded with a tribute to the outgoing comic.

"We've grown up with you. The country has," he said. "After a tough day at the office or coming home from work, knowing you?ve been there to give us a little bit of joy, a little bit of laughter, it has meant so much. You're part of all of us."

Watch three clips from CBS below. You can watch the full episode here.