'One of the little Negro boys is called Jig': Check out the racist textbook Alabama's lawmakers grew up on 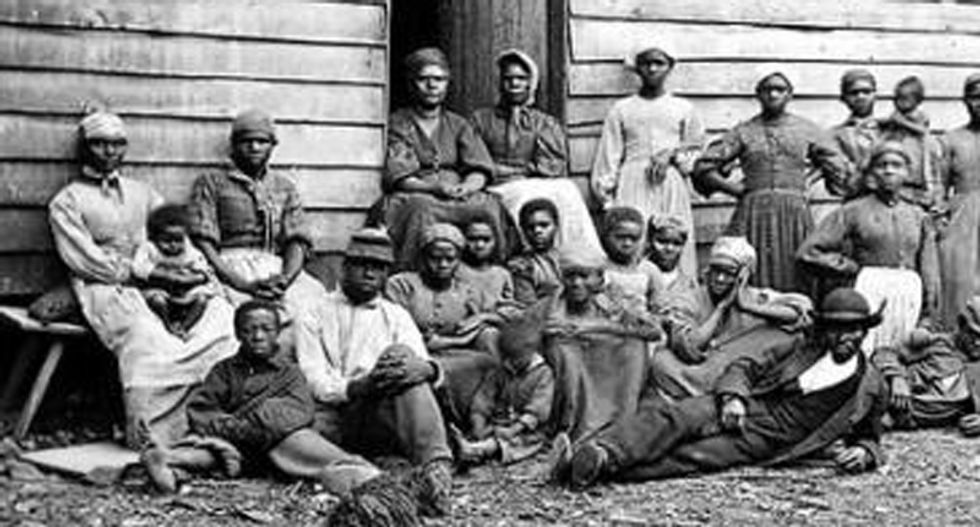 As Alabama lawmakers look into allowing teachers in the state to teach alternatives to mainstream scientific theories, AL.com took a not-so fond-look back on a history textbook used in Alabama schools that likely informed the elected leaders' worldview and suggests that education might be best left up to the educators.

Up until the 70's, fourth graders in Alabama's elementary schools used a standardized textbook titled" Know Alabama," which painted a rosy picture of plantation life with happy slaves toiling away and the Ku Klux Klan reestablishing law and order in the state after the Civil War.

"How's it coming Sam," your father asks one of the old Negroes.

"'Fine, Marse Tom, 'jes fine. We got 'most more cotton than we can pick.' Then Sam chuckles to himself and goes back to picking as fast as he can.

"One of the little Negro boys is called 'Jig' He got that name because he dances so well when the Negroes play their banjos.

A later version of the book explained that not every day on the plantation was as idyllic, laying the blame upon "lazy, disobedient, and sometimes vicious" slaves.

"No plantation had a model group of slaves, for planters had to buy whatever slaves they could get. Some slaves were good workers and very obedient. Many took pride in what they did, and loved their cabins and the plantation as much as if they actually owned them. Others were lazy, disobedient, and sometimes vicious."

The schoolbook took great pains to point out that the southern states had every right to secede from the Union and only  attempted to leave in order to "keep their rights."

According to the textbook, ravaged post-war Alabama relied upon the Ku Klux Klan -- filled with "The loyal white men of Alabama" -- to help reestablish order after the state was inundated with outside-agitating "carpetbaggers."

"They (the Klan) held their courts in the dark forests at night; they passed sentence on the criminals and they carried out the sentence. Sometimes the sentence would be to leave the state. After a while the Klan struck fear in the hearts of the "carpetbaggers" and other lawless men who had taken control of the state.... The Negroes who had been fooled by the false promises of the "carpetbaggers" decided to get themselves jobs and settle down to make an honest living.

This, in turn, was appreciated by the recently freed slaves:

According to AL.com, "Know Alabama" fell out of use in the 70's after the assassination of Martin Luther King Jr. who received only one mention in a 1970 updated edition.