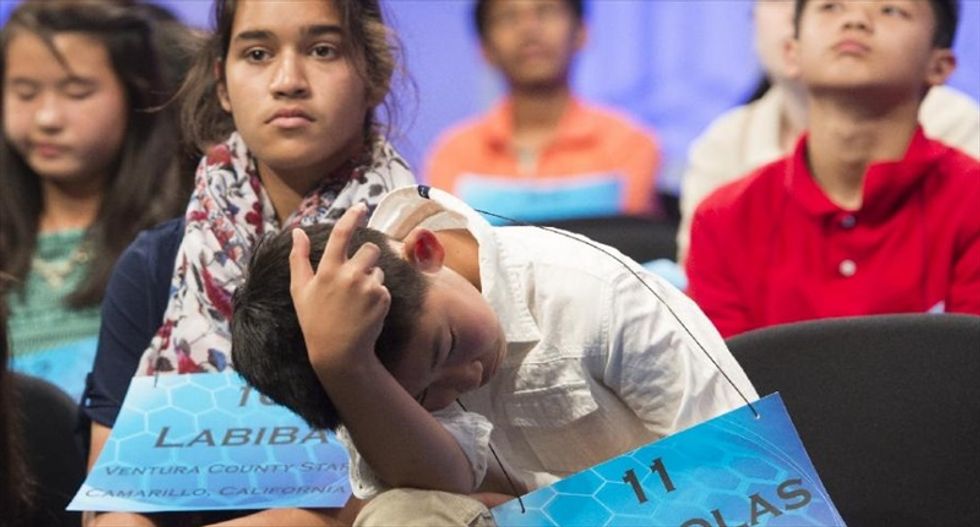 Nicholas Lee of Rancho Cucamonga, California waits onstage following his turn during the 3rd round of the 88th Annual Scripps National Spelling Bee at National Harbor, Maryland on May 27, 2015. Photo by Saul Loeb for Agence France-Presse.

Racist trolling on social media is casting an ugly pall over, of all things, the world's foremost spelling bee.

For seven years in a row, and for 11 of the past 15 years, the $30,000 Scripps National Spelling Bee championship has been won by American youngsters of Indian heritage.

Chances are as good as ever that another one will follow suit at this year's finals Thursday at the Gaylord National convention resort by the Potomac River outside Washington.

They make up one in five of the 285 spellers, aged nine through 15, from all 50 states and seven foreign countries, who ran a gauntlet of local and regional contests to qualify for the big event.

One of them, Vanya Shivashankar, 13, who lives in Kansas, is back for a fifth time -- inspired no doubt by her sister Kavya, the 2009 champion.

Last year ended in a tie between Sriran Hathwar of upstate New York and Ansun Sujoe from Texas after they failed to knock each other out after five rounds.

Their winning words, respectively, were "stichomythia" and "feuilleton."

But on social media, the reaction from some of the nearly one million people viewing the finals live on cable television veered towards the xenophobic.

"One year I wish an American kid could win," read one of several dubious Twitter posts curated on Storify.com by tech journalist Jeff Chu.

"Not to be offensive...but how do kids from India dominate the American spelling bee?!?" read another tweet.

"The kids in the spelling bee should only be AMERICAN," declared a third.

Such sentiments clearly rankle the organizers of the National Spelling Bee, whose longtime core sponsor is the Scripps media group.

"I look forward to the day, as do I think many of our South Asian participants, when they are called what they want to be called -- Americans," bee director Paige Kimble, the 1981 champion, said Wednesday.

"The bee is one of the truest forms of meritocracy, and we support every kid no matter where they come from," Kimble added.

"It's unfortunate that people have some not very nice things to say on social media."

Americans of South Asian heritage make up just one percent of the US population, but only a few are really into competitive spelling, said Northwestern University anthropology professor Shalini Shankar.

More often than not, those families hail from southern India and emigrated to America as highly educated professionals, notably in the tech sector.

"The kids that do make it are extremely talented by any standard, but even among Indian Americans they are really gifted," she said.

They also keep in practice, thanks to a network of regular competitive spelling events on the margins of the usual scholastic fixtures, Shankar told AFP.

And it's not just in spelling, either.

Seven of the 10 finalists in the National Geographic Bee earlier this month were Indian American, including the winner, Karan Menon, from New Jersey.

Only once has the National Spelling Bee actually been won by a non-American: Jody-Anne Maxwell, whose 1998 victory made her a celebrity in her native Jamaica.

Whatever their background, bee winners find themselves in pole position when it comes to going forward with their young lives.

He's now in his final year at Harvard.