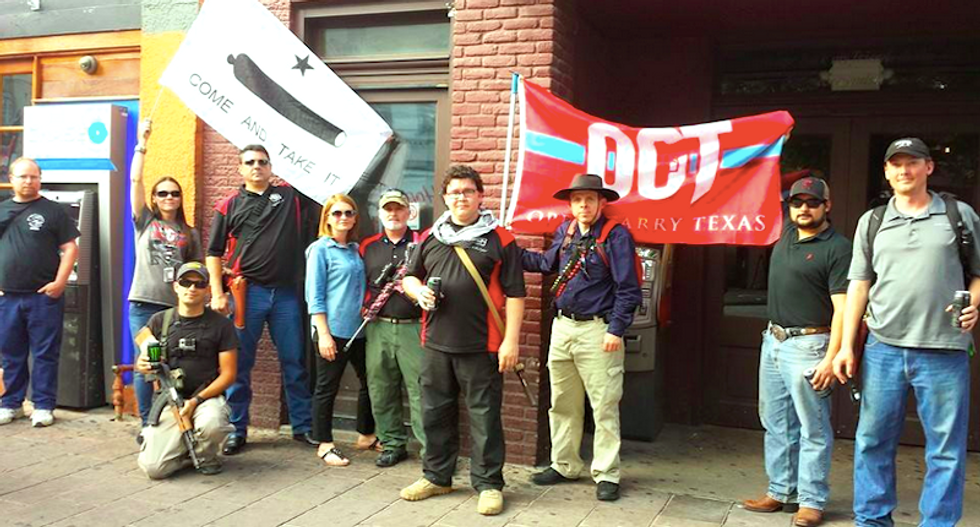 Kilt-wearing, gun-toting activists mobbed a Texas police station to protest comments made by the chief against proposed open carry legislation.

Austin police Chief Art Acevado recently criticized a bill that appears likely to pass the GOP legislature to allow the open carry of firearms, saying the legislation sounds like something drafted by “criminals, drug cartels, and extremists.”

About 30 activists, including Open Carry Texas members, carried shotguns, AR-15 rifles, and other long guns Wednesday afternoon to the Austin police headquarters – the scene of a shootout nearly six months ago between officers and a white supremacist.

"There are pot marks in the concrete, bullet holes all over the place -- really, Art?” said CJ Grisham, pointing out damage still visible from the shootout. “Are we keeping guns out of the hands of criminals? Is keeping me from having an open carried pistol going to prevent that in the future?”

Grisham insisted he had no problem with the department or its officers – only the chief.

House Bill 910 would prevent police officers from checking to see if a person seen carrying a handgun was properly licensed, and Grisham said the chief’s position violated the Second Amendment.

The demonstrators, who included Grisham’s wife carrying a pink AR-15 strapped to her back, marched through downtown after the rally to “normalize” the sight of people carrying rifles in public.

Grisham reminded demonstrators to double-check their weapons’ safety to prevent them from accidentally firing.

“The last thing we need is a negligent discharge,” Grisham said. “That would undermine the whole cause.”