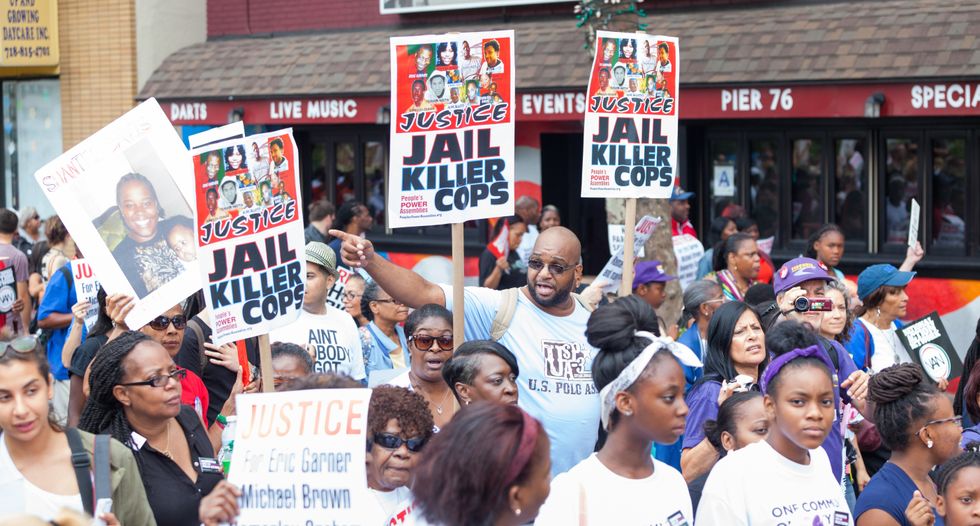 On the same day and at the same time, Mothers Against Police Brutality and the Texas Organizing Project launched protests at the Dallas City Hall. The organizations' mission statements might be different, but their goal on Friday was the same: an end to law enforcement terrorizing their communities. Hundreds of people walked through the streets of Dallas, demanding peaceful change.

"On one corner, crowds were shouting, 'Hands up! Don't shoot!,'"  WFAA reports, "Not too far away, another large group repeated,  'Sí, se puede!'"

Defending the long arm of the law on Friday was Backing the Blue, which stresses to Breitbart Texas that it is "not a protest group," but rather "an idea which appeals to law abiding citizens of Dallas of all races and all walks of life."

A spokesperson for Backing the Blue tells  Breitbart:  “We are not saying [the police] work in a perfect system. We are not saying they are infallible. There are lots of problems, but the problems rarely start with the character of these officers – character that is currently under attack.  The problems often involve complex social-political issues and policies that cannot easily be solved… and certainly cannot be solved by destroying property or other civil lawlessness.”

Texans Against Gun Grabbers showed up to Friday's protests, too. Though the organization insists on its Facebook page that it is not responsible for mobilizing the various open carry activists who showed up.

"I just want the get something straight," the post reads. "There is a person or some people that are saying that TAGG will and its members will be at the event in Dallas tonight armed and whatever. TAGG is not any type of armed militia or anything like that. I am one person and the only admin of this page. This page was created to share information and nothing more. If your reading this then you already know the kind of information I pass along. I have said since the minute I found out about this protest that it has the potential to be volatile and dangerous and TO STAY AWAY FROM DALLAS IF YOU CAN. So please stop spreading lies, it makes you look really dumb when the truth comes out.."

The group taking credit for the gun advocate presence at Friday's protests is Don't Comply. The "About" section of the organization's Facebook page begins with, "The Frontline is Everywhere!"

“We don’t want what happened in Ferguson and Baltimore to happen here,” a man with a rifle strapped to his body tells WFAA.

Watch protestors in Dallas get fired up to march against police violence: