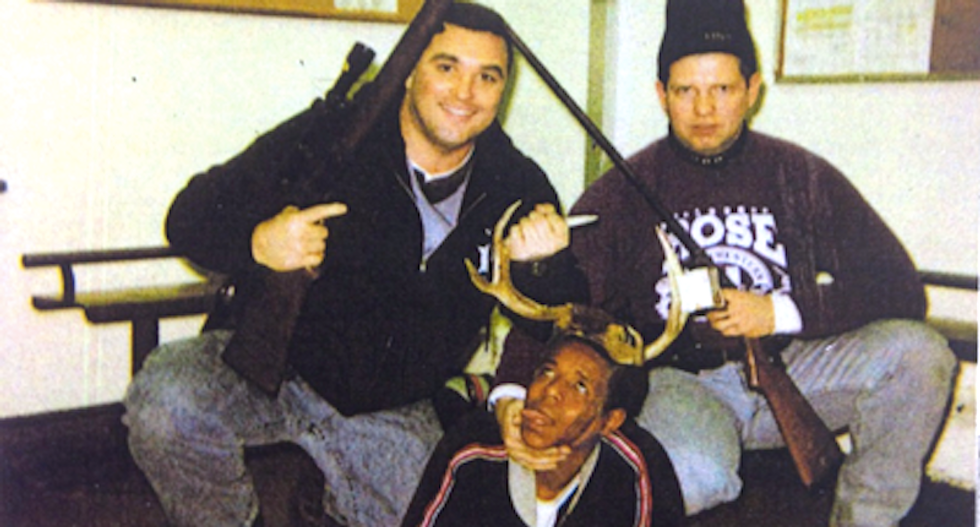 A judge ruled against Chicago police and ordered them to release a photo that shows two rifle-toting officers kneeling over a black suspect wearing deer antlers.

The Polaroid picture, believed to be taken between 1999 and 2003, was turned over to the city by federal prosecutors after Jerome Finnigan, one of the officers in the photo, was sentenced to 12 years in prison for organizing robberies and home invasions with other cops.

The other officer in the photo, Timothy McDermott, was fired last year by a 5-4 vote by the police board, reported the Chicago Sun-Times.

The dissenters said McDermott should only be suspended, but the majority said treating the unidentified black suspect as “a hunted animal is a disgrace and shocks the conscience.”

Attorneys for the police department and McDermott, who is appealing his firing, asked Judge Thomas Allen to keep the photo from being released to protect the suspect’s privacy.

The judge denied the request in March, and the Sun-Times recently obtained the photo in a court file.

Finnigan told prosecutors that he and McDermott had arrested the man because he had “20 bags of weed,” but neither officer filed an arrest report for the case and they apparently let him go because he did not have a serious criminal background.

The person who took the photo, which Finnigan said was a “spur of the moment” stunt,” has not been identified.

The police superintendent said the photograph was “disgusting” and “despicable,” and he said both officers deserved to be fired.