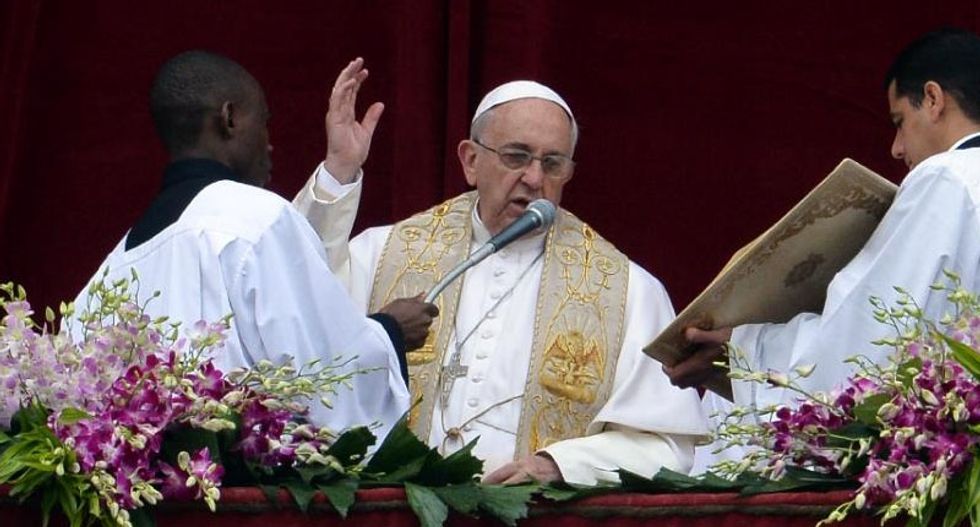 Pope Francis on Tuesday warned "the powerful of the Earth" they will answer to God if they fail to protect the environment to ensure the world can feed its population.

"The planet has enough food for all, but it seems that there is a lack of willingness to share it with everyone," Francis said at a mass to mark the opening of the general assembly of the Catholic charitable organisation Caritas.

"We must do what we can so that everyone has something to eat, but we must also remind the powerful of the earth that God will call them to judgement one day and there it will be revealed if they really tried to provide food for Him in every person and if they did what they could to preserve the environment so that it could produce this food."

The striking comments from the Argentinian pontiff came ahead of the upcoming publication of a papal encyclical on the ethical aspects of environmental issues that is eagerly awaited by campaigners for action to address global warming.

An encyclical is a statement of fundamental principles designed to guide Catholic teaching on a subject. It is issued in the form of a letter from the pope to bishops around the world.

Campaigners on climate change believe that a signal from Francis that the Church considers global warming a grave danger could influence the global discussion on the severity of the problem, what has caused it and what can be done.

The pope is due to address the UN Special Summit on Sustainable Development in September and the international community will seek to agree a universal agreement on climate change at a summit in Paris in December.

Climate change sceptics have warned Francis not to take sides in the debate but all the signs so far are that he sees the problem as man-made and as one which can be alleviated by political action.

Caritas is a confederation of 165 Catholic charity and aid groups operating in 200 countries worldwide.

It holds a general assembly once every four years. This year's meeting, the first under Francis's papacy, runs to Saturday.

Manila archbishop Luis Antonio Tagle is tipped to take over from Hondurian cardinal Oscar Rodriguez Maradiaga as the organisation's president, the latter cleric having served the maximum two terms.