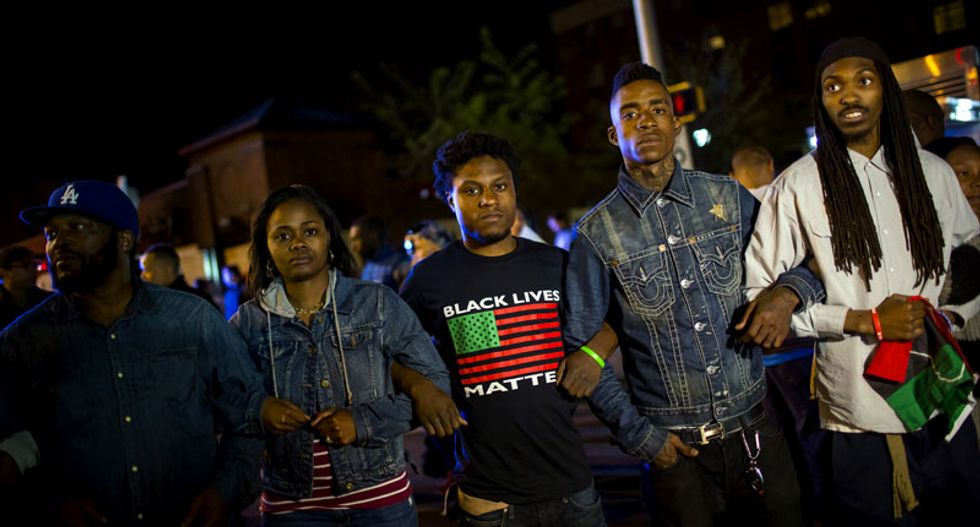 Protestors line up shortly before the deadline for a city-wide curfew at North Ave and Pennsylvania Ave in Baltimore, Maryland April 30, 2015. REUTERS/Eric Thayer

Protesters and the family of a 25-year-old black man who died of injuries sustained while in police custody planned a May Day march in Baltimore as they demanded answers and punishment for the officers involved.

Freddie Gray's death is the latest in a string of incidents exposing the tense relations between U.S. minorities and police. Protesters planned to use annual May 1 marches, marking International Labor Day, to focus attention on the case, which follows the killings of unarmed black men in recent months.

Police in Baltimore turned over their report on the case a day earlier to prosecutors but released few details publicly, though local media reports suggested Gray may have been injured while he was in the back of a police van.

After rioting in Baltimore on Monday, protests have spread to major cities around the United States, resembling scenes of outrage sparked last year by police killings of unarmed black men in Ferguson, Missouri, New York and elsewhere.

Baltimore City State's Attorney Marilyn Mosby, a black woman who is the daughter and granddaughter of police officers, has now taken over the investigation to determine what exactly happened to Gray and whether any of the six officers involved in his arrest should face criminal charges. The six have been suspended from duty.

Mosby said her office has been conducting its own independent probe. The U.S. Justice Department is also investigating the case.

"All I want her to do is one thing: Search for the truth," said U.S. Representative Elijah Cummings, a Democrat who has been a fixture in the largely peaceful protests that followed Monday's rioting. "We must allow the process to go forward."

Gray suffered spinal injuries some time between his April 12 arrest and his arrival at a police station. Police have said Gray was not restrained during the ride, a violation of department policies. He died a week later.

Despite the protests, many questions about Gray's death remain unanswered. But media reports on Thursday provided possible accounts of what may have happened.

Multiple law enforcement sources told local broadcaster WJLA that the medical examiner found Gray's neck appeared to have broken when his head slammed into the back of the van. He also suffered a head wound matching a bolt jutting from the vehicle's back door, the sources told the station.

The Washington Post cited a prisoner, who rode in the police van with Gray but could not see him, as saying he heard sounds that suggested Gray tried to hurt himself while riding in the vehicle, according to a document written by a police investigator.

Many on the streets of Baltimore were skeptical of the idea that Gray's injuries were self-inflicted.

"The police did that," said Eugene Russell, 46. "And the police are going to get away with it."

Roughly 270 people have been arrested since Monday's violence - which saw stores looted, dozens of buildings and cars burned, and numerous officers injured - and officials have since imposed a citywide 10:00 p.m. curfew.

Police Commissioner Anthony Batts said on Wednesday that more than 100 people had been released without being charged, because officials could not keep up with the paperwork, though he said charges would be brought later.

But public defender Marci Tarrant Johnson described the conditions endured by many of the arrestees before their release in a Facebook posting Wednesday that has since gone viral.

Johnson wrote that many had been illegally detained for more than 24 hours and that women she interviewed had taken to using slices of bread served as part of their meals as pillows.

"Interviewing these women was emotionally exhausting. Quite a few of them began crying - so happy to finally see someone who might know why they were there, or perhaps how they might get out of this Kafka-esque nightmare," she wrote.

"The cells were designed to hold people for a few hours, not a few days," she said.

Baltimore police and the state's Department of Public Safety and Correctional Services could not be immediately reached on Friday morning to comment on the allegations.

The Associated Press reported on Wednesday that one of the officers involved in Gray's arrest had been hospitalized three years ago over mental health concerns. The report could not be independently confirmed.