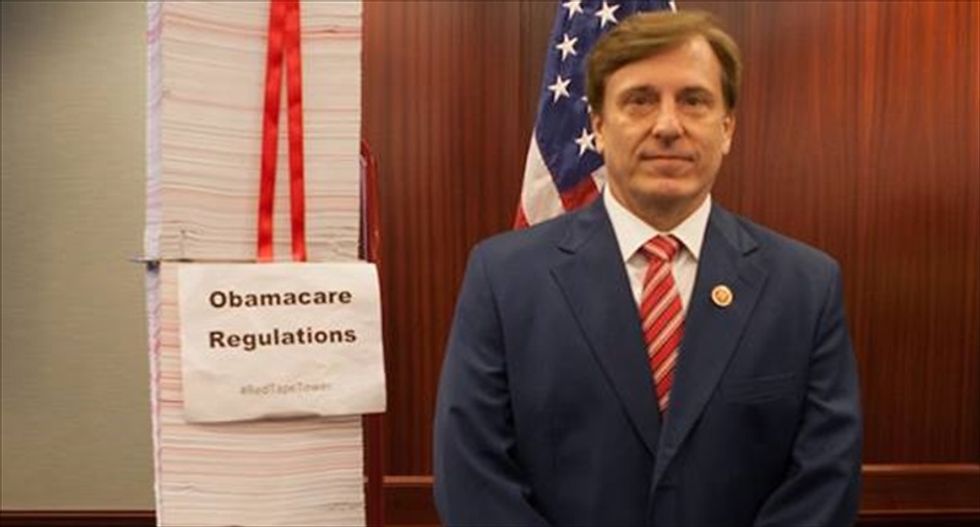 In a debate on the House floor over the Department of Veterans Affairs’ policies on medical marijuana, Representative John Fleming (R-LA) warned colleagues that allowing veterans to smoke pot could turn them psychotic or schizophrenic.

"As a practicing physician and a veteran myself," Fleming stated during the April 29 legislative proceedings, "the way we approach health care is not to just allow any healthcare provider to do whatever he or she wants to do at the time. That is simply not the way health care works."

According to Fleming, letting doctors and patients make their own decisions about marijuana could be dangerous, which is why the federal government needs to step in.

"Smoking pot increases psychotic episodes by a factor of two to four times normal," Fleming elaborates. "The conversion to schizophrenia, a permanent mental disorder, is enhanced by pot by a factor of two -- double. Why in the world would we give a drug that is addictive, that is prohibited under Schedule I, that is not accepted for any specific mental disease or disorder and enhances psychosis and schizophrenia, why are we going to give that to our veterans, especially those with PTSD? That is just absolutely insane."

Representative Earl Blumenauer (D-OR), concerned that VA health care providers are prohibited by law "from completing forms brought by their patients seeking recommendations or opinions regarding a veteran's participation in a State medical marijuana program," shot back at Fleming with his own pot policy assessments. A staunch cycling advocate, Blumenauer was wearing his signature bicycle lapel pin at the time.

"Medical marijuana is nowhere near as addictive as what is happening to our veterans right now," Blumenauer reports, "Veterans seen by agency doctors are dying from prescription drug overdoses nearly twice the national average."

"Nobody dies from an overdose of marijuana," Blumenauer continues, "and the VA doctors prescribe significantly more opiates, which are highly addictive, to patients with PTSD and depression than other veterans, even though those people suffering those conditions are more at risk of overdose and suicide. Get your facts straight."

Blumenauer concludes his response to his Republican colleague in saying, "If you want to be concerned, be concerned about the explosion of addictive drugs that are being prescribed to people who we should be giving more care. I yield back the balance of my time."