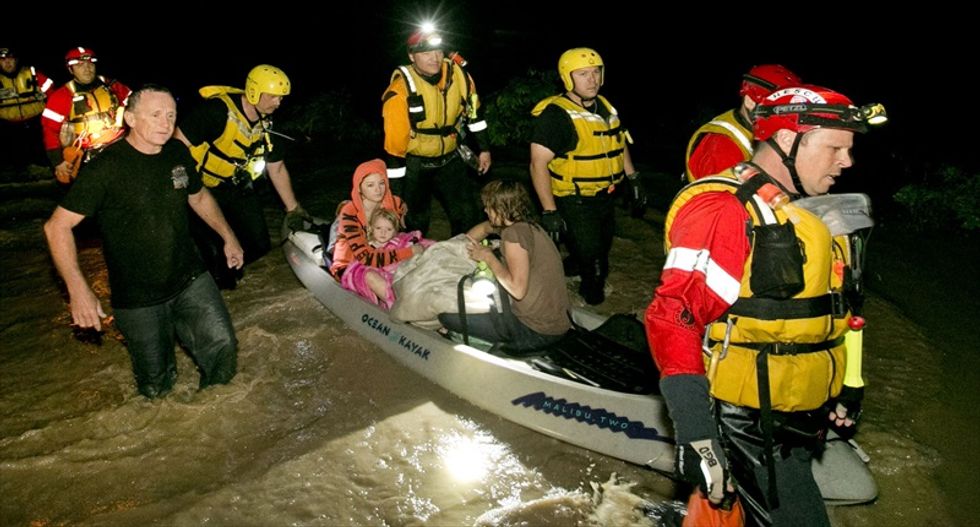 Mark Norris, walking in black t-shirt, Retha Norris, Ally Smith, 4, and Christina Norris (L to R), are rescued by firefighters after clinging to a tree at their home during flooding, in Kyle, Texas on May 24, 2015. REUTERS/Jay Janner/American-Statesman

Texas Governor Greg Abbott on Monday described the flash flooding that had killed at least three people in his state as "a relentless wall of water that mowed down huge trees like they were grass."

Abbott declared states of disaster in 24 counties and flew over the area south of Austin to assess the damage caused by tornadoes, heavy rainfall, thunderstorms and flooding that forced evacuations and rooftop rescues and left thousands of residents without electrical power.

"This is the biggest flood this area of Texas has ever seen," Abbott said.

"It is absolutely massive -- the relentless tsunami-type power of this wave of water," the governor said.

He described homes that were "completely wiped off the map" by the dangerous weather system that struck Texas and Oklahoma.

The bodies of a 14-year-old boy and his dog were found in a storm drain on Monday morning in the Dallas suburb of DeSoto, police said. Two other people killed in the storm were described as an unidentified man found dead from the flooding in San Marcos, Texas, and in Oklahoma, a firefighter who was swept into a storm drain.

A possible fourth person killed was reported by the New York Times, which said a Tulsa woman died on Saturday after her automobile hydroplaned on a highway.

Twelve people were listed as missing, including eight from an extended family from Corpus Christi who has been vacationing in a home in Wimberley that was washed off its foundation into the raging Blanco River, according to local officials and the family's church in Corpus Christi. One family member found alive was hospitalized.

Wimberley schools will be closed on Tuesday and a curfew extended for a second night on Monday in Wimberley and San Marcos, Hays County officials said.

Parts of the area have received more than 1-1/2 feet of rain since May 1, six times what he area typically receives in all of May, Accuweather.com said.

The governor's office said the severe weather could continue through the week.

Meteorologists said soil was saturated from heavy rainfall over the past three weeks, leading to the dangerous flash floods.

Prince Harry slammed the media "feeding frenzy" over his relationship with Meghan in an explosive Netflix docuseries aired Thursday, also criticizing his family for failing to protect her and his mother Diana.

The royal family has been braced for the first three episodes of six-part series "Meghan & Harry".

Following the double-hit of Donald Trump calling for the "termination" of the Constitution and then the Trump Organization being found guilty of 17 counts of tax fraud, the Chicago Tribune is calling for the removing the blight of the Trump name off of a tower that was controversial long before he became an ex-president.

According to the editorial board of the Tribune, Trump's name was placed on the tower in 2014 -- and was described as "an affront to the city’s architectural glory" -- after the then-New York businessman greased the wheels with a "$50,000 contribution to then-Mayor Rahm Emanuel’s mayoral campaign and $5,000 to Ald. Brendan Reilly’s, in whose ward the tower resides," the editors wrote.

Pro Publica
On Oct. 15, 2020, federal prosecutors took the remarkable step of arresting former Mexican Defense Minister Gen. Salvador Cienfuegos Zepeda on charges that he conspired to protect drug traffickers. Even in retirement, Cienfuegos was the most important Mexican official ever charged in a U.S. court. A month later, however, the Justice Department took the even more extraordinary step of dropping the charges.

The U.S. attorney general, William P. Barr, said his chief goal in sending Cienfuegos home was to preserve Mexico’s collaboration with the United States in fighting the drug trade. But the general’s arrest and its aftermath had the opposite effect — all but shutting down counterdrug cooperation between the two countries. Less than two months after his return, Mexican prosecutors exonerated Cienfuegos after a cursory investigation, underscoring the impunity with which the military has operated in the drug fight. President Andrés Manuel López Obrador then began attacking the Drug Enforcement Administration for “fabricating” its charges against Cienfuegos.

Last year, Mexico abandoned the Mérida Initiative, the 2007 landmark agreement by which the United States provided Mexico with more than $3.5 billion in aid and training to fight organized crime. The new pact that replaced Mérida is very much on López Obrador’s terms. Joint operations against big traffickers have been almost an afterthought. Meanwhile, fentanyl from Mexico is fueling the deadliest drug epidemic in U.S. history.