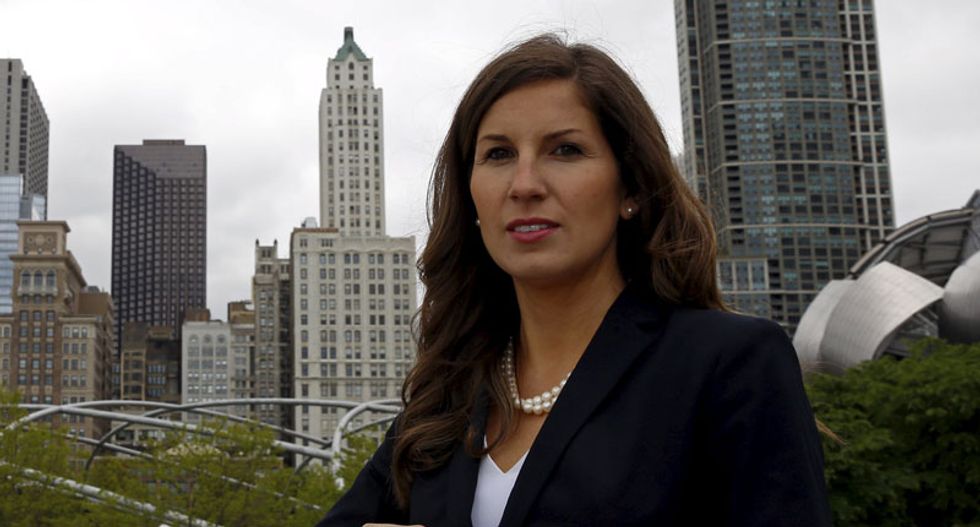 Former Illinois Senate candidate Stefanie Linares, who is a lawyer, poses for a photo in Chicago, Illinois, United States, May 12, 2015. REUTERS/Jim Young

When Republican Stefanie Linares ran for office in the deeply Democratic city of Chicago last year, she knew that her hard work wasn't likely to end in victory.

"I wasn't going to win, and I knew that going into it. It was just a platform to get our message heard," she said.

As she knocked on doors and handed out leaflets in affluent North Side neighborhoods, Linares acted as an ambassador for the Republican ticket as a whole, arguing that the Democrats who controlled state government were responsible for Illinois's fiscal woes.

The 31-year-old Hispanic lawyer lost her bid for the Illinois state Senate by a whopping margin. But Republican Bruce Rauner now sits in the Illinois governor's mansion, thanks in part to the efforts of local candidates like Linares who helped boost the Republican vote in the state's largest city.

Now Republicans are looking for a few more good losers like Linares as the 2016 presidential campaign gets under way.

The goal isn't necessarily to win these races, but to improve the performance of the Republican ticket overall and build a base for success over the longer term. That could help the party's presidential candidate as well - if he or she loses a city like Cleveland by a smaller margin, that boosts the chances of winning Ohio, a crucial swing state.

The Republican party fielded eight state legislature candidates in Chicago last year, its best showing in decades. All of those candidates lost, but Rauner won 47,000 more votes in Chicago's Cook County than the last Republican candidate did in 2010 - more than one-third of his margin of victory statewide.

Huxley and other Republicans are seeking to erode a geographic polarization that has grown more pronounced in recent decades as Americans have gradually sorted themselves into ideologically uniform neighborhoods, with Democrats clustering in densely populated cities and suburbs and Republicans scattering to distant exurbs and rural areas. (Graphic: http://reut.rs/1PJ8BOv)

In 1980, Republicans won 48 percent of the vote in the 100 largest U.S. counties, according to James Gimpel, a University of Maryland political scientist. In 2012, that share had shrunk to 38 percent.

That is an increasing liability. Republican George W. Bush carried the Cincinnati and Columbus metro areas when he won Ohio in 2004, but Obama won them both when he took the state in 2012. Bush won Colorado in 2004 thanks to his strong showing in the suburban areas around Denver; Obama won those counties, and the state, in 2012.

Fast-growing urban areas are turning states that were once solidly Republican, like Virginia and North Carolina, into battlegrounds and pushing formerly competitive states like Pennsylvania further out of Republicans' reach. Even in deeply conservative Texas, the state's four largest cities - Houston, Dallas, San Antonio and Austin - voted for Obama in 2012.

Stung by their poor performance among Hispanics in the 2012 election, the Republican National Committee has tried to build bridges with minority groups, who mostly live in urban areas.

That's important, but it overlooks the affluent professionals who may already be sympathetic to Republican views on fiscal issues, said Jill Homan, a Republican National Committee member in Washington.

"Too often we have a conversation about who we need to reach," Homan said. "The conversation should not just be about who, but about where."

"We need candidates and elected officials who actually have an urban agenda," said Cuyahoga Republican Party chairman Rob Frost, who pointed out that Ohio Governor John Kasich won the heavily Democratic county last year in his successful re-election bid last year after campaigning on the need to improve schools in Cleveland. Frost recruited four African-American candidates last year and is aiming to recruit more for 2016.

Democrats' dominance in urban areas means that Republicans can more plausibly blame them for shortcomings.

"There was more energy and more candidates in Chicago because there was a new hunger to change direction," said Chip Englander, who managed Rauner's campaign in Illinois and now is managing Kentucky Senator Rand Paul's presidential bid.

Some Republican activists say that if the party really wants to do better in urban areas, then it needs to tread more carefully on hot-button issues like gay marriage and abortion, which can alienate voters who tend to be more progressive on social issues.

"Straying from the party platform is expected in Chicago. If we held candidates to a litmus test, I'm not even sure I would be here," said Huxley, who heads the local chapter of the Log Cabin Republicans, a gay-friendly group.

But these outreach efforts can be sabotaged by more strident voices. Republicans marched in Denver's gay-pride parade in 2013, one of the city's biggest civic events, but sat out last year after blowback from other Republicans.

After Log Cabin Republicans were barred from a conservative conference and a state lawmaker said America was cursed for legalizing abortion, Denver Republican activist Earl Bandy concluded it was impossible to make inroads in his neighborhood. He quit the party a month ago.

"The brand is damaged. You can't start a conversation and say, 'Hi, I'm from the Denver Republicans.' That ends up with a door slammed in your face," he said.

In Chicago, Linares focused on issues like the state's ongoing fiscal crisis as she campaigned in gay neighborhoods like Boystown. She won the endorsement of the Chicago Tribune and established herself as a rising star in the Republican Party.

"She is, I believe, destined for greater things," said Huxley.

But those greater things won't happen in Chicago. Newly married and expecting her first child, Linares is planning to move to suburban DuPage County, where Republicans aren't quite so rare.