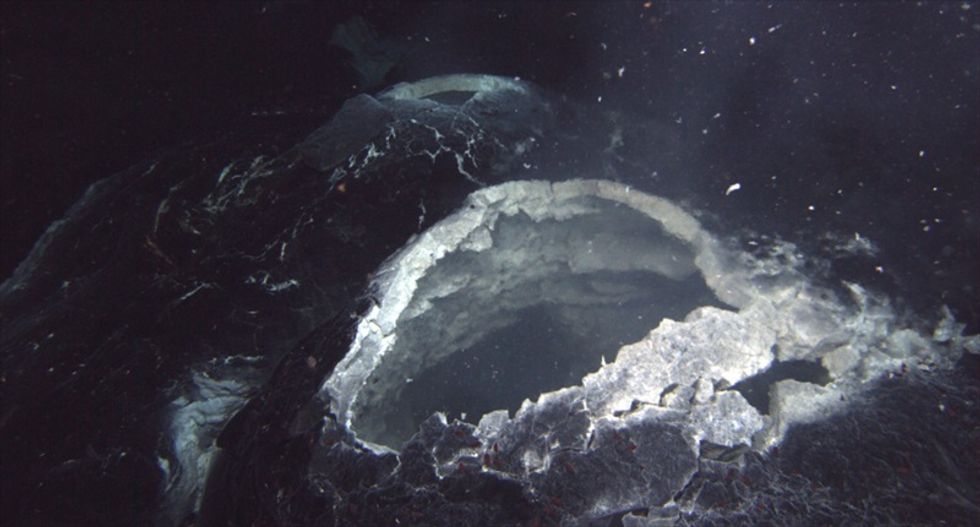 A "snowblower" hydrothermal vent spews hot water and white bits of bacterial mat that are blooming in the chemical-rich hot-spring water, showing that the lava flow that was erupted in 2011 at an undersea volcano dubbed "Axial Seamount", located off the Oregon coast, is still cooling in this undated handout photo provided by Oregon State University. REUTERS/Bill Chadwick, Oregon State University/Handout via Reuters

An undersea volcano about 300 miles (480 km) off Oregon's coast has been spewing lava for the past seven days, confirming forecasts made last fall and giving researchers unique insight into a hidden ocean hot spot, a scientist said on Friday.

Researchers know of two previous eruptions by the volcano, dubbed "Axial Seamount" for its location along the axis of an underwater mountain ridge, Oregon State University geologist Bill Chadwick said on Friday. But those 1998 and 2011 eruptions were detected months or years afterward, Chadwick added.

Last year, researchers connected monitoring gear to an undersea cable that, for the first time, allowed them to gather live data on the volcano, whose peak is about 4,900 feet (1,500 meters) below the ocean surface.

"The cable allows us to have more sensors and monitoring instruments than ever before, and it's happening in real time," said Chadwick, who also is affiliated with the U.S. National Oceanic and Atmospheric Administration.

In the past, researchers left battery-operated monitoring stations in place for several years, but were able to analyze the data only by retrieving those devices.

Pressure sensors detected that an eruption was underway on April 23. After monitoring hundreds then thousands of small earthquakes each day near Axial Seamount, they detected more than 8,000 tiny quakes over a 24-hour span on April 23, Chadwick said.

As midnight approached, pressure sensors detected the seafloor dropping - a sign that magma was erupting - and the swollen volcano was deflating like an emptying balloon. In total, the seafloor has dropped 8 feet (2.4 meters) in the past week.

Though the eruption has slowed, the volcano still seemed to be expelling magma as of Friday, he said, leaving Chadwick and scientists working with him wondering where the lava was going.

"We know it didn't erupt in the caldera, or crater, because that's where most of our sensors are, and they all survived," Chadwick said.

Temperature fluctuations and seismic readings are consistent with an eruption north of the volcano's crater, he said. "But we probably won't know until this summer, when we get out there with a ship and are able to look around."

(Reporting by Courtney Sherwood; Editing by Eric M. Johnson and Will Dunham)