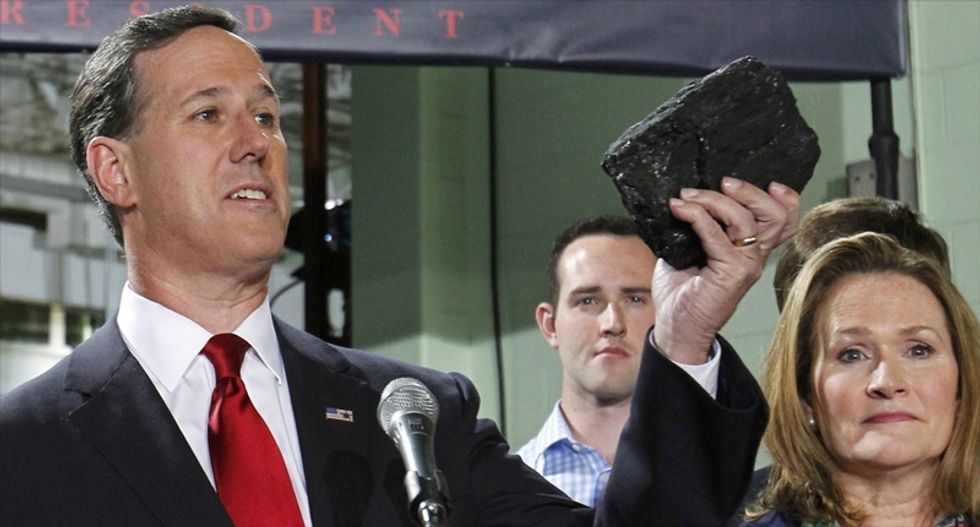 Republican Rick Santorum, who fell short in his 2012 presidential bid, launched another run for the White House on Wednesday with a promise to restore the economic power of middle-class American workers.

Santorum, 57, a former U.S. senator from Pennsylvania, emphasized his working-class roots as he formally opened his long-shot 2016 presidential bid near his childhood home in Cabot, in western Pennsylvania.

Looking to build support beyond the social and religious conservatives who bolstered his 2012 campaign, Santorum said "big government" and "big business" had left behind American workers.

"Today is the day we are going to begin to fight back," he said. "As middle America's hollowing out we can't sit idly by. Working families don't need another president tied to big government or big money."

Santorum promised to eliminate the Internal Revenue Service, back a flat tax and crack down on illegal immigration that he says has robbed jobs from American workers. He also vowed to cut federal spending and revoke "every executive order and regulation that costs Americans jobs."

In the 2012 race, Santorum won Iowa's kickoff contest and 10 other state contests with strong support from voters drawn to his social and religious conservatism and wary of the more business-oriented Mitt Romney.

Santorum outlasted other White House hopefuls to become the last remaining challenger to Romney, who ultimately captured the 2012 Republican nomination.

Santorum, whose support has languished in the low single digits in most polls ahead of the 2016 race, faces a stronger and potentially tougher field of Republican hopefuls this time.

He is the seventh Republican to formally declare a bid for the nomination, more than a year ahead of the November 2016 presidential election, joining a group that includes U.S. Senators Marco Rubio, Rand Paul and Ted Cruz. Other Republicans expected to jump into the race include former Florida Governor Jeb Bush and Wisconsin Governor Scott Walker.

Santorum will face competition for Christian conservative voters, who helped propel his 2012 bid, from former Arkansas Governor Mike Huckabee, Cruz and others, while his low poll ratings raise the possibility that he could be excluded from the early Republican debates, which begin in August.

"I know what it's like to be an underdog," Santorum said, adding he managed to win 11 state nominating contests because "I stand for someone, the American worker."

"The last race, we changed the debate. This race, with your help and God's grace, we can change the nation," he said.

A Catholic, Santorum won a reputation as a strong social conservative in Congress, where he opposed same-sex marriage and the teaching of evolution in schools. He infuriated the gay community by comparing homosexuality to bestiality.

D.C. attorney general Karl Racine sued the nonprofit Pavilion USA 2020, which had been started by political operative Fred Bush and international trade lawyer Alan Dunn, for alleged "mismanagement and greed," but The Daily Beast found investigators signed off on a deal last month that allowed their insurance company to $220,000 settlement and let them go free without admitting guilt or liability.

The culture ministry said he died after a long battle against illness, without giving details.