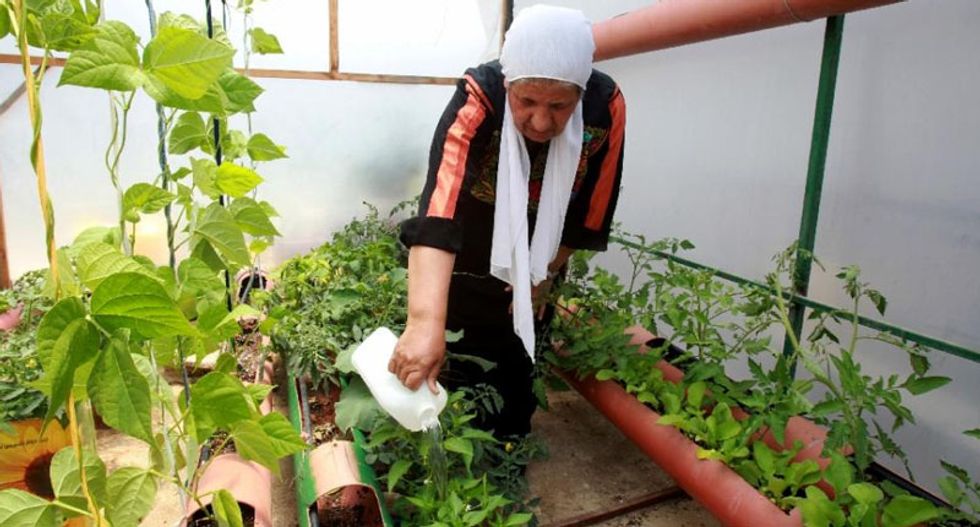 Hajjar (Hijar) Hamdane al-Ayess, a Palestinian woman tends to plants in a greenhouse on the rooftop of her house at the Deheisheh refugee camp, near the West Bank city of Bethlehem, on May 12, 2015 (AFP Photo/Musa Al-Shaer)

Hijar Hamdan al-Ayess picks off a few yellowing leaves, before pouring water into a hollowed-out pipe filled with soil where she has planted rows of aubergines, cucumbers and tomatoes.

This is her way of escaping the narrow streets of Dheishe refugee camp in the southern West Bank town of Bethlehem, which is home to some 15,000 people who once lived in 45 Palestinian villages that no longer exist.

"The Jews took our land, so to compensate and because we love the land, we decided to set up greenhouses on our rooftops," says Ayess whose parents came to Dheishe in 1952 after fleeing their village of Zakariyya near Hebron.

Ayess, who was born in the camp, would like to grow more plants but she has no space left on the roof, so she is making do with what she has while hoping for better days.

"The most important thing is for us to return to our lands, to find them again," she says as the Palestinians prepare to formally mark 67 years since the Nakba, or "catastrophe" that befell them when Israel was established in 1948.

For the Palestinians, the right to return to homes they fled or were forced out of is a prerequisite for any peace agreement with Israel, but it is a demand the Jewish state has rejected out of hand.

Yasser al-Haj, director of Karama, a local camp-based NGO which works to create opportunities for its residents, says that creating these gardens is a way of keeping alive the spirit of lands which today belong to others.

"When we cultivate land, it creates an attachment, you become tied to this land and through that to this country," he tells AFP in his office, a map of "Palestine before 1948" on the wall.

"The Jews were wrong. They hoped that the generation which lived through the Nakba would die out and that their descendants would forget," he said.

But that is not the case.

"The young people have not forgotten and they will never forget," he says as he shows a group of children how to grow tomatoes that he has brought back from Holland: oxheart tomatoes, striped tomatoes and even varieties which are pink or yellow.

Abu Fuad, who will be 100 this year, is one of those forced into exile.

He even took part in the fighting in 1948 "with a gun bought from an Egyptian who was selling weapons dating back to World War I" in order to fight and save his village, Beit Aatab some 40 kilometres (25 miles) from Bethlehem.

More than 760,000 Palestinians -- estimated today to number around 5.5 million with their descendants -- fled or were driven from their homes in 1948, with the Nakba marked every May 15.

Abu Fuad was one of them, leaving his home with everything inside it "because people thought they would come back."

Moving from place to place, he finally found a single room measuring just over six square metres (65 sq feet) which had to provide shelter for 12 people.

With no work and no money, they were forced to rely on the support of the Red Cross and the UN, with the UN's agency for Palestinian refugees (UNRWA) today still helping more than five million refugees spread across Jordan, Syria, Lebanon and the occupied territories.

When Abu Fuad left his house, he locked it with a heavy iron key which he still guards closely.

"It is sacred," he says, kissing it and touching it to his forehead.

Before Israel built the separation barrier which now surrounds Bethlehem, he went back to Beit Aatab.

"I found the place where my school was," he says, his eyes glistening as he recites one of his poems.

"Oh Muslims, Oh Christians, you have too easily abandoned Palestine!" he says, still bitter over the Arab armies who were defeated more than six decades ago.