Sansa Stark proves the critics wrong on Game of Thrones 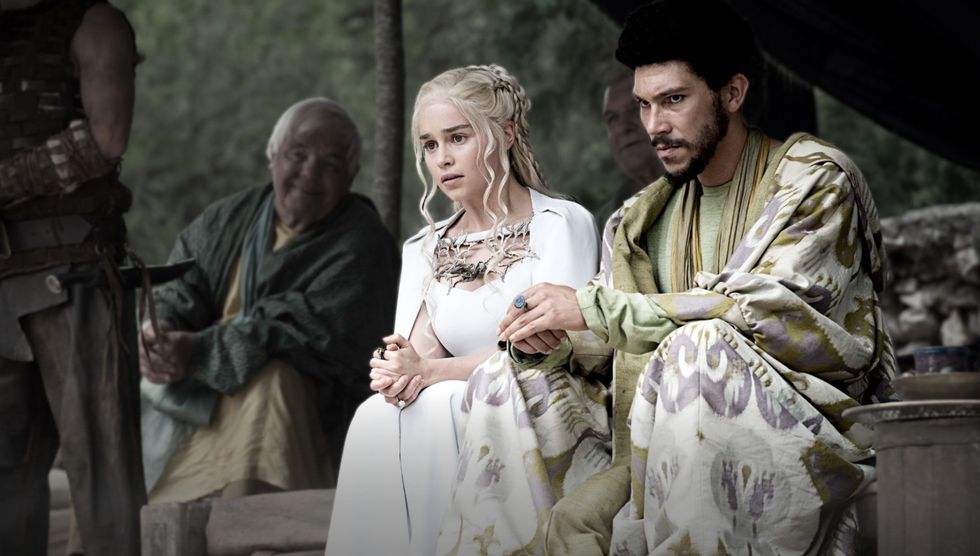 The Orange Couch's Mad Men reviews are over, but we still have Game of Thrones. As a reminder, Marc and I are doing videos where we we answer some burning questions you might have about the larger world of Westeros. This week, we explain who that "Egg" was that Maester Aemon was muttering about and why Baelor the Blessed, who built the Great Sept, matters. Also, a reminder that while we all love Tyrion Lannister, Dany might just want to toss him in a jail cell.

Well, too bad everyone wasted all the fussing and freaking out over rape on Game of Thrones last week, because this week the writers actually did fuck it all up. Not with Sansa---that continues to be a fascinating storyline, as I will get to in a moment---but with Gilly.

I don't mind that the show runners are increasing tensions with Sam and Gilly at the Wall. That's a way more efficient way of moving along a book plot line where they go to Oldtown that the elaborate baby switcharoo ordeal in the books. Indeed, this storyline actually means a lot less of Gilly crying, which, while justified for the character, gets old really fast for the audience. So that's all good. But there was no need for Gilly to be subject to an attempted rape to get them to this point.

Look, they have all the motivation they need to get out of Dodge: They need a Maester and Aemon is dead. Aliser Thorne and company are being nasty to Sam and he's therefore ineffectual there. They could also, as in the books, be looking for employment and safety for Gilly, neither of which is available at the Wall. Having Gilly and Sam decide they need to take off for Oldtown didn't need an attempted rape.

In addition, the attempted rape didn't really fit with what we know about the Wall. I realize that the idea is that discipline is breaking down, but I don't actually buy that idea. The Night's Watch brothers can be increasingly angry over this wildling situation without falling into criminality against an innocent woman. I also struggle to see Alliser Throne allowing rape to happen on the premises. He may hate wildlings, but he also hates disorder. In the books---this isn't a spoiler, not really---Jon goes to pretty great lengths to prevent the rapes of wildling women. I think it would be more interesting if Thorne was doing that, albeit reluctantly, keeping his character as a shades-of-grey villain instead of a pure villain.

But I expect very little outrage compared to the Sansa situation. Gilly is a minor character, isn't a virgin, isn't a noble, and the rape wasn't completed. People will grouse, but it's not going to be the "you are the worst and rape is never appropriate ever!" reaction we got last week. Which goes to show what really motivates the outrage and it isn't devotion to tight, character-driven storytelling.

Despite that and despite the continuing train wreck that is the Sand Snakes, I feel the Sansa storyline is really clicking. Many critics claimed her rape must mean she no longer has agency or strength, but the show is demonstrating more respect for Sansa than the critics were, by showing that being raped doesn't change who she really is, deep down inside: A strong, clever survivor. As I predicted on Huffington Post Live, by switching the Ramsey rapes from a minor character in the books to Sansa, the show runners are actually improving the story by making it one of a woman's survival as much, if not more, than a man's redemption.

In the book, Jeyne Poole is just a punching bag. Unlike Sansa, she's not a player and thus just takes Ramsey's abuse without any ability, mental or otherwise, to fight back. She acts, well, like Theon: Just simpering and submissive. This isn't her fault, since simpering and submissive are the only tools of survival available to her. Because of this, Jeyne can't play any part in her own rescue. That's not her fault or a sign the character lacks agency---can we quit with the use of that word already, since it apparently is meant to imply there's a "wrong" way to survive rape?---but structurally, she's in a situation where the only course of action she can take is "do nothing".

Sansa, however, enters this storyline with more resources. She has her family name, which gives her some protection from Ramsey's machinations, insofar as he's not going to bust out her teeth or take her fingers like he did to Theon. She has allies. She is willing to test her limits by needling Ramsey. Most importantly, unlike her counterpart in the books, she is taking an active role in reaching out to Theon and trying to turn him into an ally. She is not a simpering damsel, but is always hunting, thinking, trying to figure things out. She continues to be one of my favorite characters for it.

Is Sansa afraid? Of course! That reminds me of one of the best exchanges from early in the story.

Bran: Can a man still be brave if he’s afraid?

Eddard: That is the only time a man can be brave.

I think she and Brienne will quite like each other when they meet.