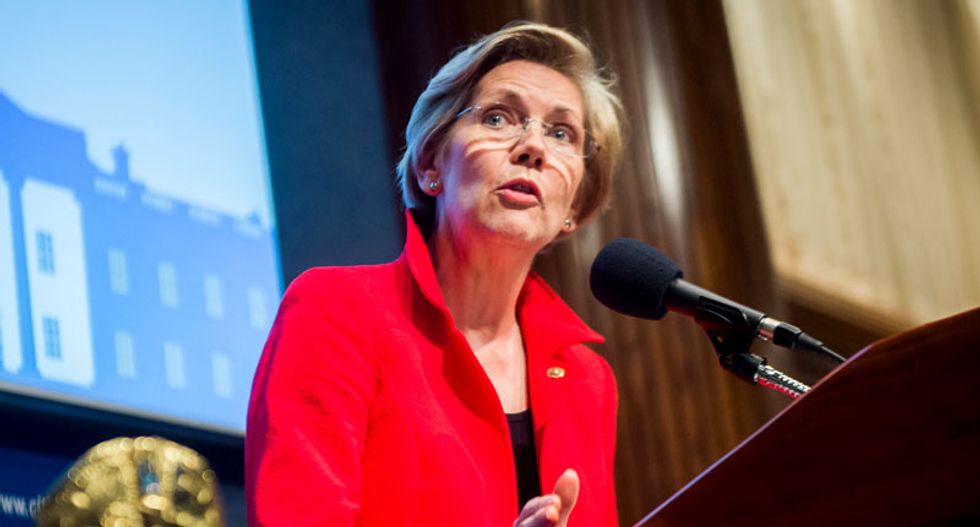 U.S. Senator Elizabeth Warren hit back at President Barack Obama in their tussle over "fast track" power to negotiate a Pacific Rim trade treaty, a power she says could be used in the future to weaken Wall Street reforms.

Warren, a Massachusetts Democrat and prominent liberal voice, stuck to her argument in an interview published on Monday with a left-leaning Washington Post blog, saying Obama should release details of the Pacific trade talks so legal experts can determine if it could be used to weaken U.S. bank rules.

"If the president is so confident it's a good deal, he should declassify the text and let people see it before asking Congress to tie its hands on fixing it," Warren said in the interview with the Plum Line blog.

The dispute between Obama and Warren, both Democrats, reflects a split within the party over the proposed Trans-Pacific Partnership (TPP) and Obama's quest for special negotiating authority.

Fast-track power would mean Congress could approve or reject his final agreement, but not change specific provisions.

Obama, in an unusual alliance with congressional Republicans, says the trade pact would open new markets in Asia and around the Pacific Ocean for U.S. goods. But many in Obama's party fear the deal will hurt American workers.

Warren has said fast-track authority, which would last six years, could be used by a future president to weaken Wall Street reforms that she championed.

She also said Democratic presidential candidate Hillary Clinton and others have raised concerns about a section of the Pacific deal related to an arbitration process for disputes between big companies and foreign governments.

"I've sat with many legal scholars to talk about this issue, and I have not seen a draft that would do what the president says" the final deal would do on this issue, Warren said.

Warren worked with the White House to set up the U.S. Consumer Financial Protection Bureau after the 2007-2009 financial crisis. Since her election in 2012, she has worked to push Senate Democrats to the left on many issues.

The Senate is expected to begin debating legislation granting fast-track negotiating authority this week. Senate Democratic leaders have threatened to hamper progress on the bill.