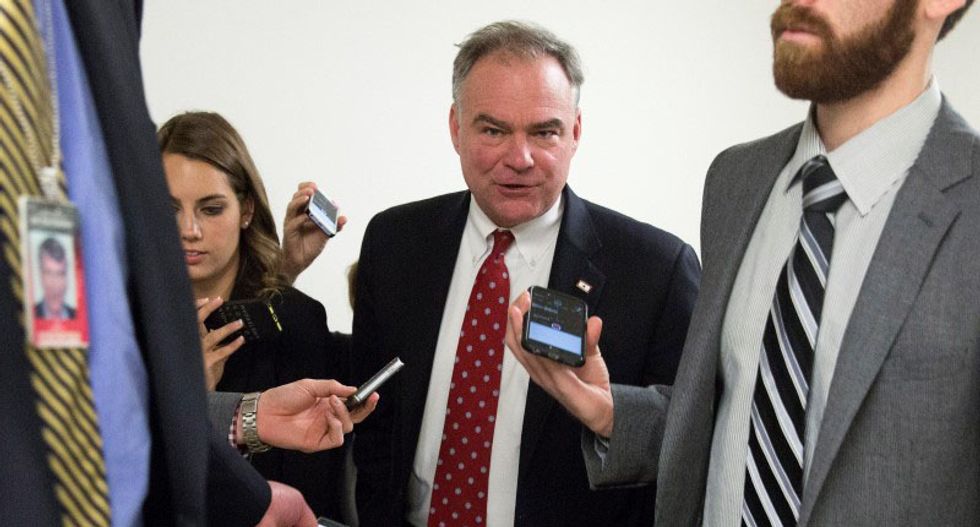 Senator Tim Kaine (D-VA) speaks to reporters as he walks to the Senate Chamber to vote on legislation for funding the Department of Homeland Security on Capitol Hill in Washington March 2, 2015. REUTERS/Joshua Roberts

Kaine, a Democratic member of the Foreign Relations Committee, has been an unrelenting critic of Congress' failure to authorize military force against Islamic State militants in Syria and Iraq, even as a U.S.-led bombing campaign has been in effect since Aug. 8.

In media interviews before a Senate speech on Thursday, Kaine outlined reasons for the delay, including congressional reluctance to take up the matter before elections last November.

"American service members have lost their lives, we've spent over $2 billion, 3,300 bombing runs and Congress hasn't even been willing to talk about this or authorize the military action," Kaine said on CNN. "This is a big scandal in my view."

He said it was disrespectful to ask American service members to risk their lives when Congress would not even debate the mission.

President Barack Obama asked Congress in February to authorize the use of military force (AUMF) against Islamic State after agitation from lawmakers who were worried that the military campaign overstepped his constitutional authority.

But the request has made little progress.

Obama's fellow Democrats worry about getting involved in another Middle East war, while the Republicans who control Congress want stronger measures than those Obama has proposed.

But Kaine said on CNN there was overwhelming backing in Congress for military action against Islamic State, and differences could be overcome so that "our allies, our adversaries and our troops all know that Congress supports this mission."