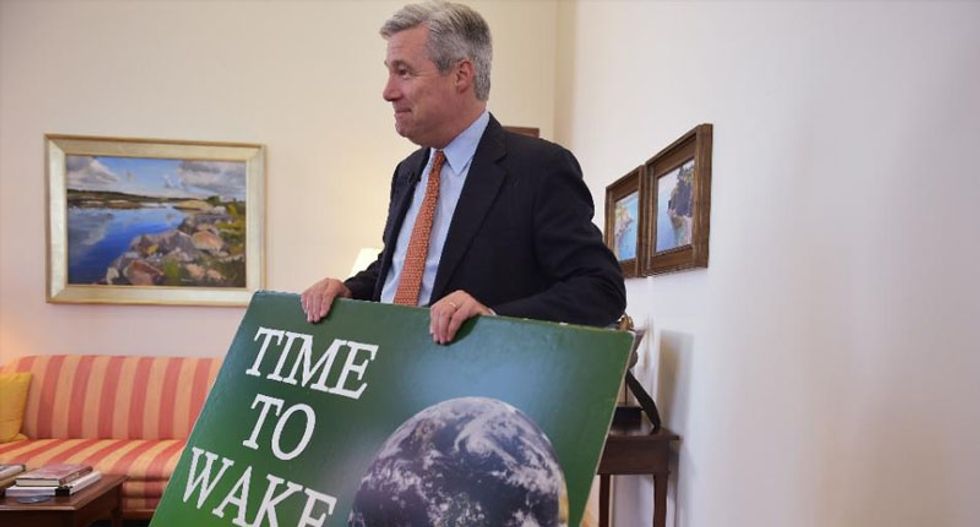 Senator Sheldon Whitehouse, D-RI, talks to Agence France-Presse at his office in the Hart Senate Office Building on May 14, 2015 on Capitol Hill in Washington, DC (AFP Photo/Mandel Ngan)

He often speaks to an empty chamber, unheard and unheeded by his colleagues.

On Monday the two-term Democrat offers his 100th Senate floor speech on climate change -- an unprecedented three-year odyssey demanding Republicans address what he believes is one of the most pressing concerns of the 21st century.

But even Whitehouse acknowledges that precious little has been achieved since he launched the marathon speech series in 2012.

A major "cap and trade" bill limiting carbon emissions passed the House early in President Barack Obama's presidency but died in the Senate.

The administration has since proposed strict powerplant emission regulations, but Republicans want them rolled back.

When Obama and China agreed last November to reduce carbon pollution, Republicans vowed to thwart that too.

"This is a little embarrassing," an exasperated Whitehouse, 59, told AFP in an interview.

Whitehouse studies effects of rising oceans on his coastal state of Rhode Island, where he has comforted families whose homes have slid into the sea, and fishermen who have seen winter flounder fish disappear from Narragansett Bay's warming waters.

Standing in the Senate beside a frayed green placard displaying Earth and the distinct "Time to Wake Up" slogan, Whitehouse points to the 97 percent of climate scientists agreeing that human activity accelerates climate change.

Then he hammers Republicans as they "sleepwalk towards disaster," and berates the fossil fuel industry which he says threatens any lawmaker who crosses it.

"You have an extremely determined, very tough incumbent industry engaged in a very forceful campaign of both disinformation and full-on political influence peddling, hanging on for dear life and trying to essentially bully the Republican Party into being its political wing," he said.

While companies like Coca-Cola and Walmart seek to reduce their carbon footprints, "members of Congress bury their heads in the sand," he said.

In his 98th speech, May 6, Whitehouse unapologetically compared the fossil fuel industry to cigarette manufacturers misleading Americans' on health consequences of smoking.

His chief nemesis is Republican James Inhofe, the climate-denying chairman of the Senate's environment committee.

Inhofe has declared manmade climate change a "hoax" and global-warming evidence "laughable," and in January he threw a snowball in the Senate, an apparent dismissal of global warming.

Despite Inhofe's power, Whitehouse attacked his views as "in the outer fringes of outlandish" and unsupported by science.

"Senator Whitehouse is a hero in championing this issue," said Henry Waxman, a 40-year congressman who retired in January, himself leaving an extraordinary environmental legacy.

"It has become another third rail," partly because "it's so easy to demonize," Whitman told AFP last year.

"We missed it early on," she said of her party's chance to confront climate hand-in-hand with Democrats, adding that moderate Republicans did not forcefully step forward.

"That allowed the skeptics to gain some credence."

Whitehouse insists his speeches have yielded progress, including greater awareness within Senate caucuses.

Yet a new crop of climate skeptics won seats in Congress last November, including James Lankford, who dismissed global warming as a "myth."

More than half of congressional Republicans reportedly have doubted humanity's effect on climate change.

But Whitehouse believes pressure on Congress, and a looming presidential election, is eroding this position.

"By the time November 2016 comes around, I don't think a Republican presidential candidate is electable who is still saying 'climate change is a hoax, or I'm not a scientist.'"

Presidential politics could explain why Republicans, including Inhofe, recently supported legislation acknowledging climate change is real -- although it said nothing about humanity's role.

It was a "strategic retreat from an indefensible position," Whitehouse said, adding the issue could tip further with Americans clamoring for change.

Republicans often approach him and "urge me to hang in there, and that they want to be with me, but they can't get there yet," he added.

Why? "No senator wants to be the first admiral hanged for crossing the fossil fuel industry."