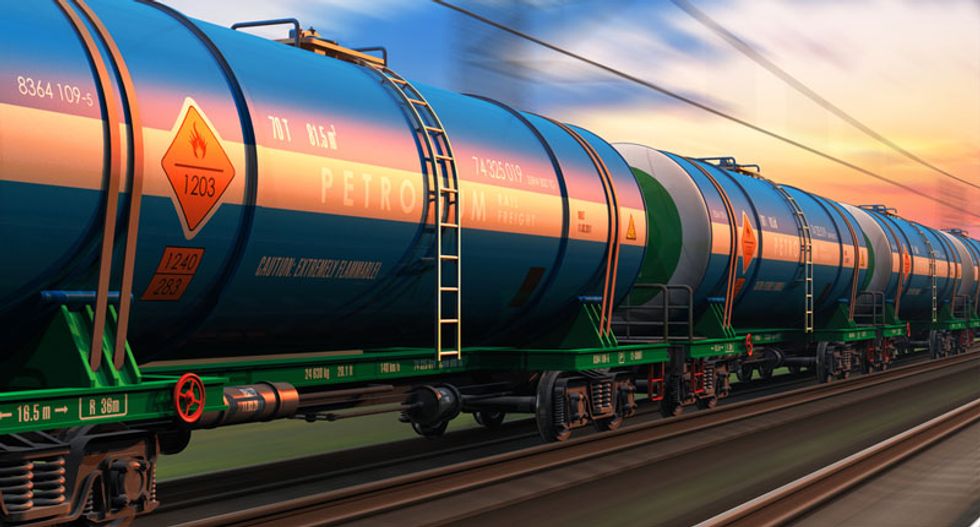 About 40 residents from the nearby tiny town of Heimdal were evacuated after as many as 10 tank cars came off the rails, fire officials and the state's emergency management agency said.

There were no injuries, officials said.

A photo posted on Facebook by a local radio station showed flames and heavy black smoke billowing from several tank cars that had derailed in a field.

But the scope of the blaze appeared limited. A woman working at JW's Restaurant Bar & Grill in nearby Harvey, North Dakota, said by telephone she couldn't see any sign of the fire and was aware of the derailment only because she had seen it on social media. Light rain was falling nearby.

Heimdal is located along one of the main rail lines heading east out of the state's giant Bakken oil patch. About two-thirds of all North Dakota oil production is shipped by rail, three-quarters of that to refiners on the U.S. East Coast.

"We are aware of crude derailment and resulting fire near Heimdal, ND. We have investigators on their way. Will update when we know more," Sarah Feinberg, acting administrator at the Federal Railroad Administration, said in a message on Twitter.

In a statement, BNSF confirmed the derailment and fire occurred and that there were no injuries.

BNSF said the tank cars involved were unjacketed CPC-1232 models, which the new rules will render obsolete within five years.

Heimdal is one of the many small towns that dot the central North Dakota landscape and have co-existed with rail lines for decades. It has only seven streets and directly abuts the BNSF line, which has a spur to offload grain and other commodities.

FIRE COULD BE LEFT TO BURN OUT

It was not immediately clear how state officials planned to respond to the fire or if the crude involved had high levels of combustible natural gas liquids. Highway patrol officials were at the scene alongside local fire departments.

"In the past we've just let these burn out," said Cecily Fong of the state's Department of Emergency Services.

New state rules that took effect last month mandate that most NGLs be removed from oil before shipment, though Fong said the quality of the crude involved in this derailment is not known at this time.

The derailment occurred early Wednesday morning between Hamburg and Heimdal. The locomotive engine and roughly 99 tank cars not affected were unhitched and moved away, Fong said.

On the non-jacketed CPC-1232s - involved in Wednesday's derailment - William Furman, chief executive of railcar manufacturer Greenbrier Cos, said in a recent interview that they are as dangerous as older cars if they derail and ignite, causing a ripple effect of fire and explosions.

"If they roll, release and ignite from friction or drag, they will ignite others that aren't jacketed or insulated," Furman said. "One car burning will crease torch effect that will burn through the other cars, that car heats, and it blows up like a Coke bottle in a microwave oven."

Greenbrier has been marketing a more fortified railcar with thicker steel, head shields and protected valves and fittings for more than a year, and the design matches the new standard adopted for crude railcars by U.S. regulators last week.

The volume of crude oil by rail has rocketed in recent years as production increases from areas like North Dakota outpaced new pipeline development.

A spate of explosive accidents have accompanied that growth, the worst of which occurred in July 2013 when a train derailed in the town of Lac Megantic in Canada, killing 47 people.

Already this year, five trains have derailed and caught fire in the United States and Canada, all in rural areas. No deaths have occurred but the accidents have stoked concerns about the safety of crude oil by rail.