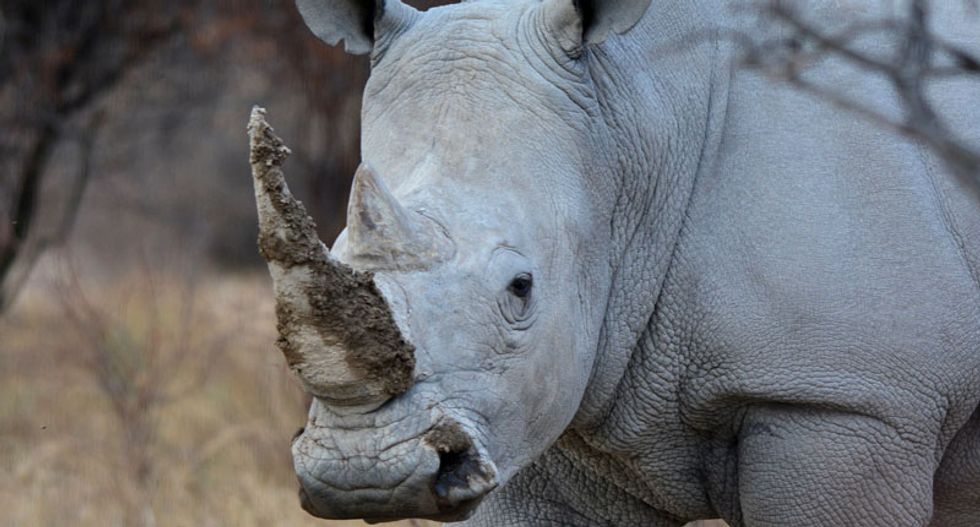 The South African government said Sunday that more rhinos had been poached in 2015 than in the previous year, as the number of poached rhinos in the country balloons to record levels.

"By the end of April 2015 the number of rhino we lost to poachers was 393 for the whole country, of these 290 were poached in the Kruger National Park," said Environment Minister Edna Molewa at a press conference in Pretoria.

"By this time last year, the number of rhino lost to poachers was 331 for whole of the country and 212 for the Kruger National Park."

The Kruger National Park, a massive area bordering Mozambique, is home to the majority of South Africa's 20,700 rhinos.

The latest figures were released at the first public briefing on rhino poaching the South African government has given in months.

"This is not deliberate it is because of the heavy load of work that we have," explained Molewa.

While Molewa was upbeat giving her briefing -- saying the measures are "bearing fruit" and slamming media for negative coverage -- she admitted that the government's strategy needs work.

"We are soldiering on, we do think that this fight will have to be won and we will win it," said Molewa. The animals are killed for their horn, used in traditional Asian medicine.

Since rhino poaching started skyrocketing in 2008, South African authorities have struggled to contain the carnage despite moving some animals out of poaching hotspots in the Kruger.

Even after appointing an ex-army general to oversee anti-poaching operations, the number of rhinos killed continues to increase as cash-strapped South Africans and Mozambicans join the lucrative trade in the horn.

South African police commissioner Riah Phiyega reported that, as of the end of April, park rangers detained 132 suspected poachers, crediting the use of helicopters and anti-poaching dogs for the uptick in arrests.

In South Africa, many people buy beaded "Rhino Force" bracelets and affix life-sized red plastic rhino horns to the bonnets of their cars in support the anti-rhino poaching cause.

The government in February announced it would investigate whether the trade in rhino horn should be legalized and regulated to try to halt the poaching.