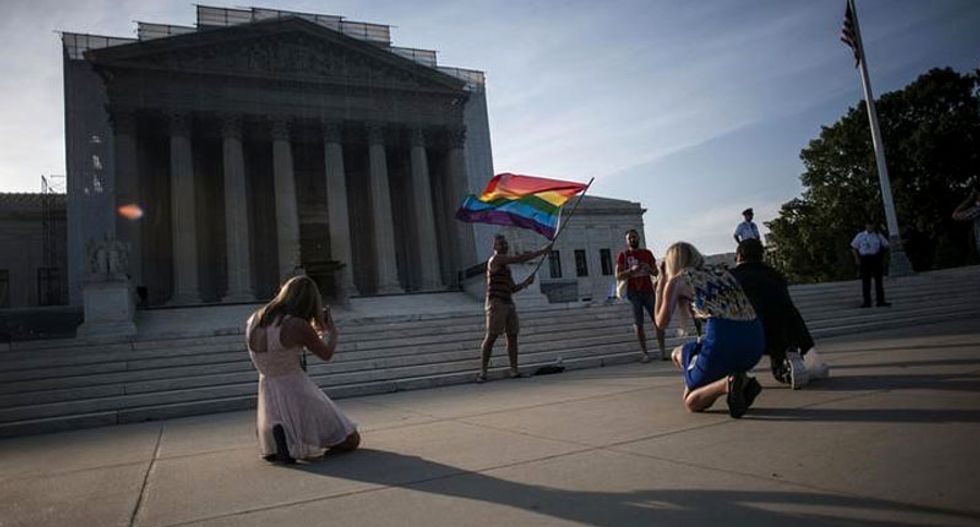 A demonstrator (back) waves a flag while awaiting decisions in two cases regarding same-sex marriage at the U.S. Supreme Court in Washington, June 26, 2013. REUTERS/James Lawler Duggan

The court declined to hear a challenge to the law, meaning that a September ruling by the 3rd U.S. Circuit Court of Appeals upholding the ban is the final word on the matter.

The appeals court said the ban, which Republican Governor Chris Christie signed into law in August 2013, did not violate the free speech or religious rights of counselors offering "gay conversion therapy" to convert homosexual minors into heterosexuals.

The panel also said the plaintiffs, who included licensed therapists and a Christian counseling group, lacked standing to pursue claims on behalf of their minor clients.

In 1973, the American Psychiatric Association declassified homosexuality as a mental disorder, but various conservative and religious groups have since argued that sexual orientation can be changed.

Plaintiffs challenging the New Jersey ban included two counselors, the National Association for Research and Therapy of Homosexuality and the American Association of Christian Counselors.

Monday's action marked the second time the high court has declined to hear a challenge to such a law. In June 2014, the court left intact California's conversion therapy ban.