Suzanne Venker thinks marriage is soulless and loveless, wants everyone to have one 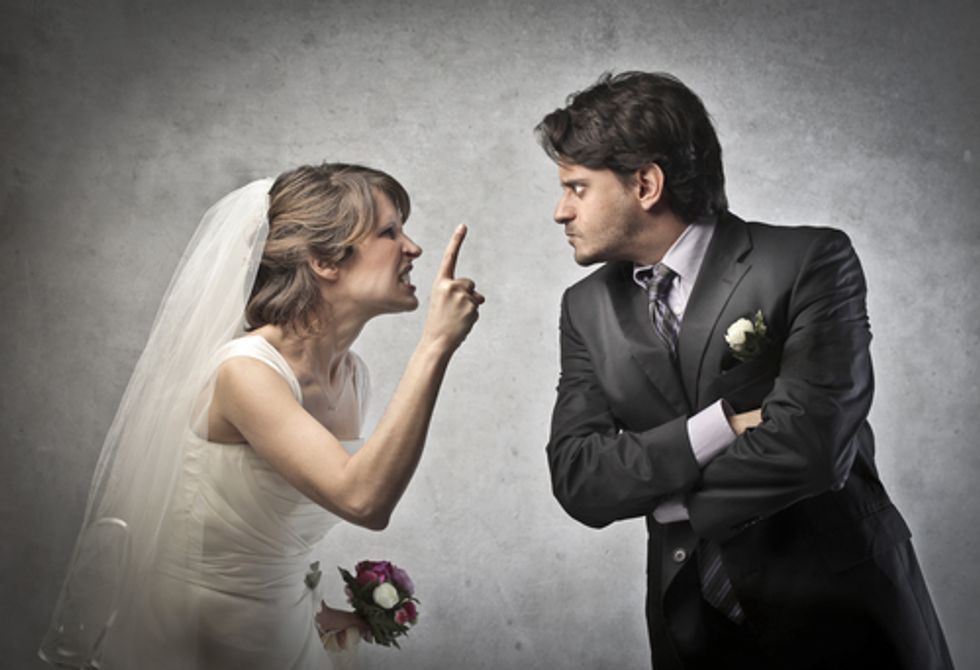 Suzanne Venker, Phyllis Schlafly's niece who wants to get in on that sweet female misogynist money, is at it again. This time it's a piece titled "Why men won't marry you", for Fox (of course), which already starts off on a weird, accusatory foot: Are we really to believe that men, en masse, are boycotting you, the reader? Right away, you're faced with a troublingly unlikely premise, which is that women are just dangling their fingers out, eager to get a ring on it from a man, any man, and that the low marriage rates are because men are like, nah. There's no evidence of this, and in fact, strong evidence to the contrary.

Anyway, what follows is the usually litany of claims that women are inferior creatures who men need to be bribed and cajoled into enduring.

1. Because they can: Men used to marry to have sex and a family. They married for love, too, but they had to marry the girl before taking her to bed, or at least work really, really hard to wear her down. Those days are gone.

She says men want "love", but let's be honest: If you love someone, you don't need to be strong-armed into being with them with threats of never getting your dick wet if you don't. (Maybe she means that men want to be loved, even if they cannot love themselves. Which at least makes sense, though continues not to be true.) As usual with this argument, it's premised, no matter what she says, on the idea that men are incapable of loving women and so have to be subjected to artificial sex shortages to get them dragged, reluctantly, into relationships.

Scoff if you wish. Call me a fuddy-duddy. But how’s that new plan working out?

Pretty well, thanks! I don't want to get married, but if I did, I can't imagine that my dream would be for a man to fall one on knee and say, "Women annoy me, I kind of hate you, and if it wasn't for my biological imperative to fuck, I would never want to see you again. But I need to get laid sometime before I'm 40, so okay, here's your fucking ring. Can you please give me pussy now?" I can't imagine I'm alone in this.

To be fair, Venker doesn't think men just want women for sex. She also thinks they want an unpaid supplicant, as well.

By which she means, there was a time when women did all the emotional work, housework and just general submitting in exchange for not being tossed out on the street.

Or perhaps therein lies the rub. If women no longer expect or even want men to “take care of” them — since women can do everything men can do and better, thank you very much, feminism — perhaps the flipside is the assumption that women don’t need to take care of husbands, either. And if no one’s taking care of anyone, why the hell marry?

For love? I guess men don't do that, in Venker's world. Not that she thinks women are capable of love, either.

For women, the reason is obvious: kids. Eventually most women decide they want children, no matter how long they put it off to focus on their careers. So they often nab the best guy they can find, usually the one with whom they’re currently sleeping, and convince him to get married.

Got it. For Venker, all women are to men are a bunch of holes to fuck and a pair of hands to clean up after you, and all men are to women is a wallet. And she's upset because women making their own money might bring an end to people who hate each other living in misery because one of them wants sex and the other one is afraid her other option is starvation. Her argument isn't complicated at all, but there is one mystery here: Why is it that we---and I mean all of us, not just women---want this system again? She makes marriage sound like the worst thing in the world. If it's really as bad as she says, then it's not dying off as fast as it needs to. Life is too short for all that. Better to spend time around people you want to be with who actually want to be with you.