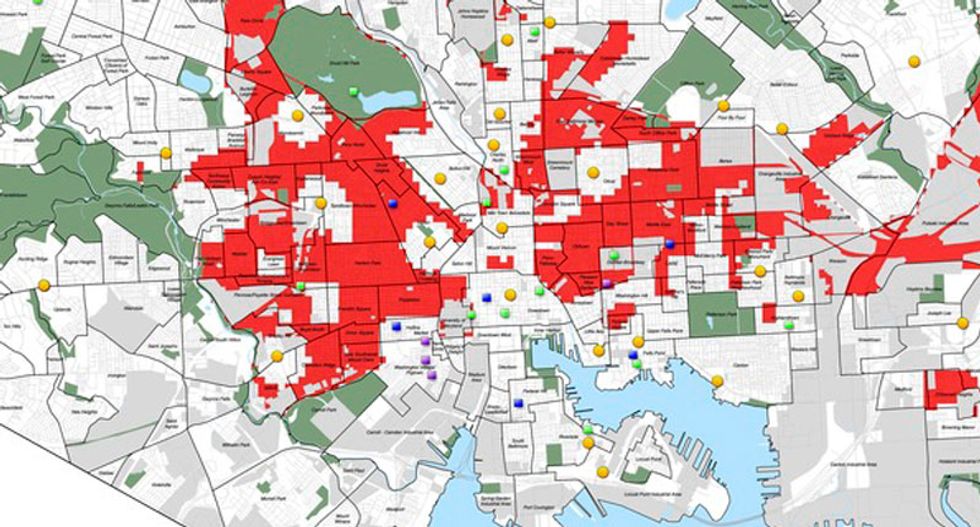 The life of Freddie Gray, and of so many others, was endangered many times over by numerous forms of systemic racism before it was finally taken in the custody of police – an event that has sparked protests in Baltimore this week. Among these forms of endangerment was the lead that poisoned Gray as a child.

Reports indicate that Freddie Gray, like too many children – especially children of color and those in poverty – experienced significant exposure to lead as a child.

In 2008, Gray’s family filed a lawsuit against Stanley Rochkind, the owner of a home they rented for four years, arguing their children’s exposure to lead “played a significant part in their educational, behavioral and medical problems,” according to reports.

Those levels of lead in Gray’s blood far exceeded the upper limit of five micrograms per deciliter deemed safe by the Centers for Disease Control and Prevention (CDC).

Extensive research has demonstrated that childhood lead exposure can cause life-long and very serious developmental, cognitive, medical, and psychological issues.

These harmful effects can happen from the womb, even at low levels of exposure. Researchers point out that exposure to lead and other environmental toxins can have significant effects on the developing brains of babies, even at levels far lower than those that would be toxic to adults.

So as we examine the problems of systemic racism, economic injustice, and state misconduct, we should be careful not to leave out hidden forms of violence, including environmental injustice.

“Our very great concern… is that children worldwide are being exposed to unrecognized toxic chemicals that are silently eroding intelligence, disrupting behaviors, truncating future achievements and damaging societies.”

This poisonous lead exposure, and the possible developmental harm it causes, is just one example of the invisible violence inflicted on so many individuals through absorption of environmental toxins and through other harmful and unequal environmental conditions.

Environmental issues are not often described in terms of violence, at least not violence against humans. But the environmental injustice that slowly poisons poor and minority individuals and deprives them of access to healthy food and healthy living environments in the US and globally is, in my view, most certainly a form of violence.

Rob Nixon, a professor of English at the University of Wisconsin–Madison, calls this type of harm to vulnerable populations “slow violence.”

Environmental injustice may seem like a secondary issue in the face of massive police brutality, poverty, and civil uprising, and I don’t suggest that it should preempt conversations about other forms of systemic racism.

But as we talk about the devaluing of black lives and black bodies that has taken place in Baltimore and across the country and the world, we cannot ignore the ways that this manifests in a subtle and constant disregard for the health of marginalized communities.

Lead poisoning may sound like a small issue or one that is primarily in the past, but this is not the case. It is a far-too common event in many regions in the US.

Combined with this are conditions in which black and poor individuals often have limited access to fresh food and green space.

These communities also experience disproportionate proximity to garbage incinerators, factories, and other sources of toxic emissions, according to a number of studies from academics, advocacy groups and government agencies.

Freddie Gray serves as an example of the issue of food deserts as well; he lived in a community with limited access to fresh food (see the map here from Johns Hopkins Bloomberg School of Public Health), as do one in five residents of Baltimore City and one in four school-aged children in Baltimore.

Red areas indicate ‘food deserts’ in Baltimore, areas where the distance to a supermarket is more than a quarter mile and the median income is below the poverty level and other factors.

Research also indicates that “in areas where residents are almost entirely white, there is 11 times more green space than areas where more than 40% of residents are black, Asian or minority ethnic.” And while class and income level are factors in these types of environmental injustice, race remains a major factor even when isolated from class.

Outside the US, we see these same phenomena playing out among many poor and non-white populations. And this inequity is exaggerated even further when we consider that those populations most affected by climate change are likely to be in poor countries with predominantly black and brown people.

Indeed, many have argued that the delay among wealthy nations to significantly curb climate change is motivated by a lack of interest in or respect for the lives of people of color.

Issues of systemic racism like widespread poverty and police brutality deserve much more attention than white America has given them.

I don’t wish to draw any attention away from these issues, or from a full examination of police misconduct in cases like Gray’s and many others.

But to fully demand any justice for Freddie Gray and other victims of systemic violence, we have to reject all forms of systemic racism, including the subtle but devastating forms of environmental racism.

Freddie Gray’s life ended violently and tragically in the custody of police. This tragedy, and so many others like it, must be answered for. But the tragedies of Gray’s life started long before this, not only with underfunded schools, income inequality, and myriad egregious denials of institutional support for his community, but also with the slow theft of his potential caused by his exposure to toxins like lead.

This country is denying huge numbers of black and brown children their chance to achieve untold levels of cognitive potential by quietly poisoning them. We then compound this denial by providing deeply unequal educational opportunities. And, finally, we disregard their civil rights as well.

Addressing any one piece of this picture while leaving the others in place guarantees continued injustice.

For more coverage on the Freddy Gray and the Baltimore riots, see here.