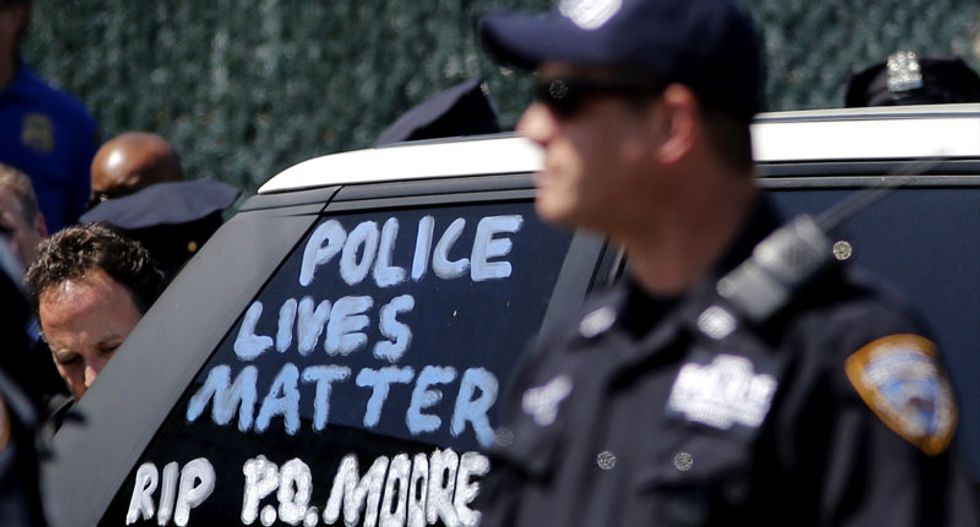 Thousands of police from around the United States were expected at Friday's funeral for a 25-year-old New York City officer who was shot in the head while on patrol, making him the fifth member of the NYPD to die in the line of duty since December.

The funeral for the New York Police Department's Brian Moore was slated to begin at 11 a.m. EDT at St. James Roman Catholic Church in Seaford, a Long Island suburb east of the city.

It comes only five months after two other New York patrolmen were fatally shot while sitting in their patrol car, highlighting the dangers faced by law enforcement in the city.

U.S. Representative Peter King, a Republican who represents the congressional district where Moore lived, said the officer's slaying was a reminder of the courage and sacrifice that police make to protect the public.

"It's actually been a terrible year for the police because they've been attacked, they've been assailed and meanwhile they're being shot and murdered," he said before entering the church. "But the thing about cops is they keep going."

King's comments reflect the politically charged climate that has enveloped police departments around the country, following several cases of unjustified use of police force that have resulted in the deaths of black men. The deaths have sparked demands for a review of police tactics and measures such as requiring officers to wear body cameras.

Moore, a decorated five-year veteran who followed in his father's footsteps in joining the NYPD, was gunned down over the weekend in the borough of Queens after trying to question a man who subsequently fired into his unmarked car. The plainclothes officer died of his wounds on Monday.

The suspect, Demetrius Blackwell, 35, was arrested shortly after the shooting and remains in custody. Police recovered a five-shot revolver that had been stolen in Georgia in 2011.

Only a day earlier, six Baltimore police officers were charged in the death of Freddie Gray, a black man who sustained spinal injuries while in police custody. His death triggered a week of protests in the city, punctuated by a night of looting and arson.

In Moore's death, police say there was no indication that the crime had any hidden motivations.

In December, the gunman who killed officers Wenjian Liu and Rafael Ramos on a Brooklyn street had left messages saying he wanted to kill police at random out of vengeance for the death of black men at the hands of white officers.

On Thursday, thousands of officers in dress blue lined up outside a Long Island funeral home where a wake was held for Moore.