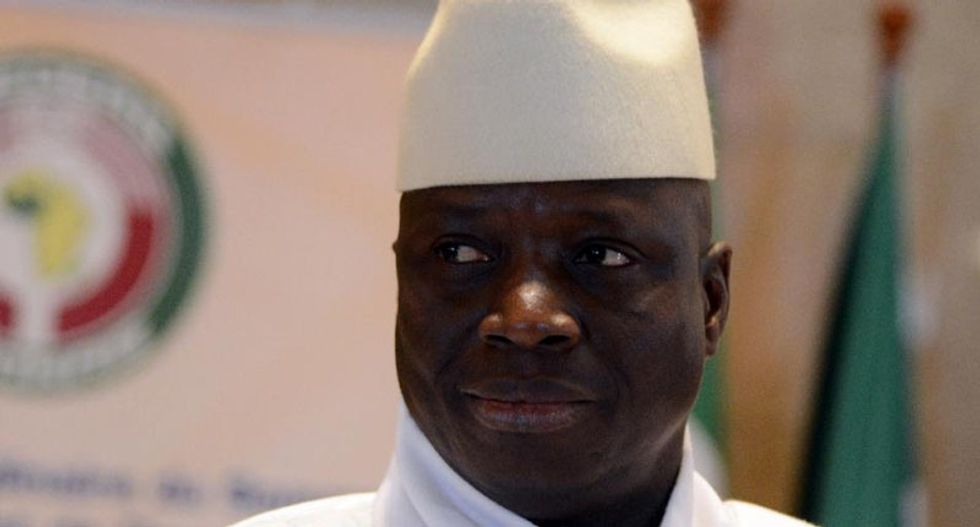 The United States slammed Gambian President Yahya Jammeh on Saturday for "unconscionable" remarks, after the West African leader reportedly threatened to slit the throats of gay men in his country.

In a public speech this month, Jammeh said he would slit the throats of men who wanted to marry other men in the small West African nation, according to Human Rights Campaign.

Without quoting his remarks, US National Security Advisor Susan Rice said the comments were part of an "alarming deterioration of the broader human rights situation" in Gambia.

"The recent unconscionable comments by Gambian President Yahya Jammeh underscore why we must continue to seek a world in which no one lives in fear of violence or persecution because of who they are or whom they love," Rice said in a statement.

Homosexuality is illegal in Gambia, and Jammeh created in October the crime of "aggravated homosexuality" which carries a sentence of up to life imprisonment.

Rice said the United States is concerned about reports of broader rights violations in the country, including allegations of missing US citizens.

"We are deeply concerned about credible reports of torture, suspicious disappearances -– including of two American citizens -- and arbitrary detention at the government's hands," Rice said.

Rice warned the US could take action. It revoked trade preferences with Gambia last year following reports of a crackdown against the country's lesbian, gay, bisexual and transgender (LGBT) community.

"We are reviewing what additional actions are appropriate to respond to this worsening situation," Rice said.

"We repeat our call for the Gambian government, and all governments, to lead inclusively, repudiate intolerance, and promote respect for the universal rights and fundamental freedoms of all people."

Rice's comments come ahead of the International Day Against Homophobia and Transphobia on Sunday.

Jammeh has ruled the former British colony, which has a population of 1.8 million, with an iron fist since seizing power in 1994.

His presidential guard squashed a coup attempt in December, and rights groups have reported a wave of arrests, detentions and harassment targeting family members of those suspected of involvement.

Homosexuality is illegal in 36 out of 54 African countries and punishable by death in four, according to rights watchdog Amnesty International.